Sisters get Real with Sponsorship!

It won’t be long until the April 2013 Whitby Goth Weekend, and one of the highlights every time is the charity football match between Athletico Gazette and Real Gothic. Or haggard hacks and hungover Goths, which as you can imagine is a clash close to my heart!

A welcome addition to the sight of post-middle-age men staggering around a cold and windy football pitch is the Sisters of Real, the WAGs of the Boys in Black from Real Gothic – and a football team in their own right! One of them is Louise Street, an eleven-year (and counting!) regular of the Whitby Gothic Weekend.

“The idea of the Sisters of Real came about from a conversation from two of our founding members and original players on the team. Claire Nally and Anne Burns felt there was too much time being wasted at the midway point of the game, and thought it would be fun if the girls, all glammed up and glorious in their Sunday best, could maybe do something at half time. Claire thought the idea of Goth girls partaking in sports whilst in corsets and flowing frocks would be the best thing to ever be seen on a football pitch. She was right! 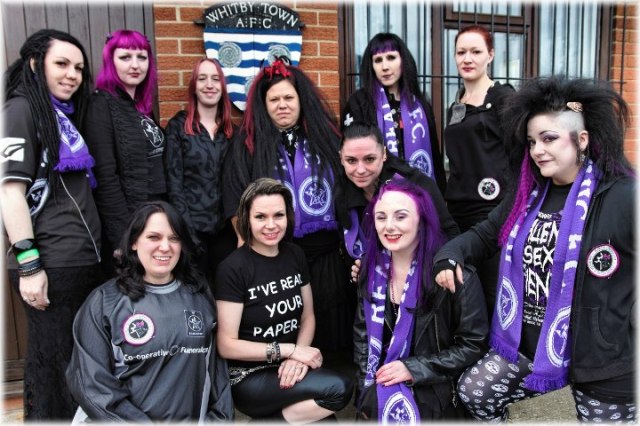 The Sisters of Real 2012 – Louise Street second from left, front

After a few drinks one evening we decided we should get together at the next game and make it a reality.  A few Facebook messages later, the dream became a reality. WGW 2011 saw the debut of the Sisters of Real penalty shoot out team.”

It isn’t all comedy though, as Lou recounts a more serious cause for the Sisters of Real.

“During the planning for this we heard the terrible news that one of the girls, Maria Bushra, who helped around the match during the games (and one of the player’s girlfriends) sadly passed away around Christmas time. Her death affected us all greatly; she was a great friend and a wonderful person, as well as being an integral part of the Real Gothic FC cause.

We wished for the Sisters of Real to be a team dedicated to her memory. When we play, all money raised goes to Maria’s chosen charity – SOS Children’s Villages.

This was a charity close to her heart. They help home thousands of orphans whom live on the streets. Her parents, whom are from Pakistan, have bought a house in Islamabad and have named it in memory of their daughter. All money raised from the Sisters go directly to ‘her’ house.” 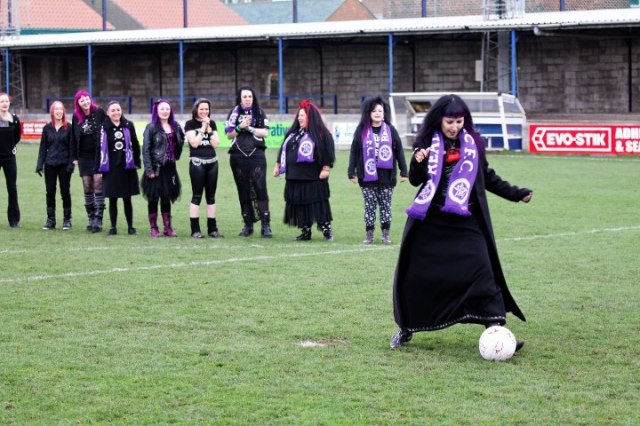 The good news is, the Girls from Goth are about to see their profile raised, thanks to a brand new sponsor. Illamasqua is a British-born, globally-based cosmetics company that has its own stores in Leeds, Liverpool and London, as well as counters in department stores across America, Australia and the Middle East. I asked Louise how the company got in touch with the team, and what their plans for sponsorship were.

“Strangely enough, Julian (Kynaston, founder) got in touch with us via twitter and wanted to know if he could sponsor us – this was after mentioning we were massive fans of Illamasqua.

When he asked, I didn’t even have to think about it – in fact, I ran around the living room with my phone in my hand!”

“We are in the middle of planning a new kit at the moment with them, and we are very, very excited about it. Illamsasqua are our favourite make-up company as they not only make wicked make-up, but they very actively support another charity close to our hearts with S.O.P.H.I.E.

Julian is actually a WGW regular and got the inspiration for Illamsasqua from the festival itself. So not only are we born of WGW, so was Illamsasqua!”

I wanted to know how important it was to the Sisters of Real, and their chosen charities, to get this sponsorship.

“To have a massive company sponsor us is a true honour. I love everything Illamsasqua stands for. It’s all about standing proud, and being proud to be different. If it helps spread our name and our charity then it will be a great success. We’re looking forward to stepping out in April in our new Illamsasqua kits!” 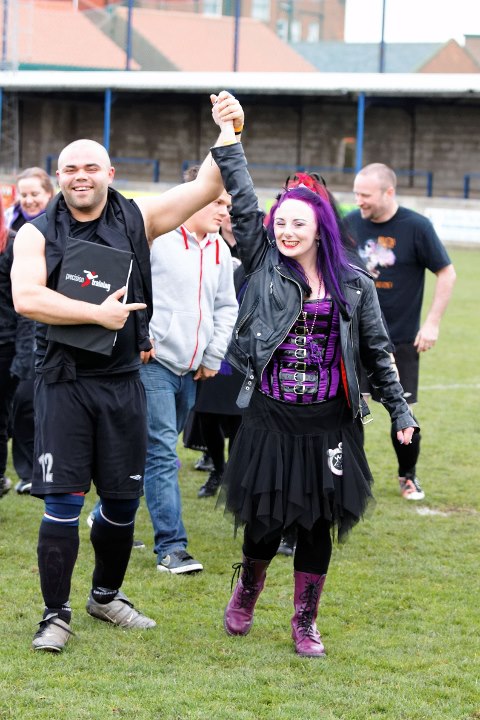 The April football match now will be even more hotly anticipated, as alongside these new strips will be the usual ritual humiliation of the Real Gothic team, the sarcastic commentary, the raucous heckling by the crowd, the raffle prizes (all proceeds to charity) and of course, the club bar!

Stop off at Whitby Town Football Club on Upgang Lane, 2pm on Sunday 28th April. Entrance is usually £2, but make sure you bring more for beer, raffle tickets, and the highly-valued Real Gothic FC scarves!

News, reviews and other articles written from the UK Goth subculture
View all posts by The Blogging Goth →
This entry was posted in Uncategorized and tagged charity, fun, interview. Bookmark the permalink.

3 Responses to Sisters get Real with Sponsorship!