“The Art of Gothic” by Natasha Scharf – Review

When I first heard about The Art of Gothic, the new book from author, journalist, DJ and all-round raconteur Natasha Scharf, I was expected some slim volume of familiar faces and photos. Perhaps something suitable for casually leaving on coffee table, more appearance than information.

Instead, a formidably weighty tome arrived fresh in the post from the helpful people at Omnibus Press. Sullen black and rich purple colours are subtly studded with enticing photography on this imposingly large hardback. Turning to the back cover, however, and you feel some over-exuberant PR type has got a fevered grip on Goth.

“The Art of Gothic lifts the coffin-lid on the seemingly endless appeal of the gothic aesthetic, its followers dressed head-to-toe in black, often with extreme makeup.”

It reads like an American news report, hollow wonder in its tones! Surely Scharf, author of the vital Worldwide Gothic and frequent Goth pundit, was above such shallow assumptions?

Reading her introduction I was, of course,  proven right. My favourite quote, that seems to encapsulate the entirety of the Goth ethic – no mean feat! – goes as follows:

“Dark, sensual, macabre, edgy, alternative, but always with a knowing wink, goth has become a seductive and cultural lifestyle choice.”

A dry, caustic, self-aware sense of humour is vital to this camp, cod-horror subculture we’ve somehow kept going for nigh on three decades – miss that, and you run the ultimate risk of becoming unironic. No greater crime can be committed!

Scharf sets the tone appropriately, and proceeds to launch into a tome that is deep and complex, wreathed with all the powerful imagery that comes from years of flirting – and full-on fraternising with – our darkest imaginations!

She effortlessly leads the reader through the snarling, twisting history of dark alternative music, from Andi Sex Gang’s own introduction, through Siouxsie and Bauhaus, into the Gothic metal of Lacuna Coil and Paradise Lost, the pounding techno music of Suicide Commando or Apoptygma Bezerk, and into the latest inheritors and pretenders to the throne, like Motionless in White and HIM (who have just concluded supporting stalwarts The Fields of the Nephilim).

The entire experience of Goth music history is shot through with imagery – from familiar album covers to subversive independent creations like tour and gig posters.
Beside the lone picture of arch-denier Andrew Eldritch – taken during his partnership with Patricia Morrison – is an excitingly unusual poster for The Sisters of Mercy’s gig in San Diego during their 2008 tour.

It’s this kind of departure from the well-trodden path of Goth history that makes The Art of Gothic really stand out from its contemporaries. When Natasha spoke at the Louder Than Words festival in Manchester, she stressed that the imagery and artwork were the core of her new book, and it is a rewarding decision.
Every page is bursting with the glorious, gory creativity of Goth down the ages, all captioned with commentary from the musicians and artists who realized their worst nightmares for our entertainment. 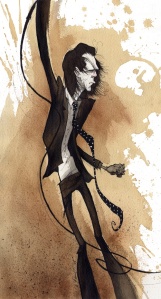 There’s a righteously revolting rendition of Nick Cave in concert, produced by American artist Gris Grimley, that to me is evocative of the great Ralph Steadman, who famously illustrated the nightmarish adventures of Hunter Thompson.
I’ve never seen anything like it before, I love it, and images like this draw me on through the packed pages.

Even as the music charts our course, Scharf makes frequent sidelines into other styles as well – from the glamorous models, to the equally well-turned-out attendees of Wave Gotik Treffen.
There’s examinations of fringe creativity like comics – think Nemi, or Rosie Poe or Johnny the Homicidal Maniac – as well as mainstream breakthroughs with movies like The Matrix and The Crow.
There’s page after page after page of the insane illustrations that adorn the albums of our favourite artists, almost all of them with fascinating trivia in the captions.

As well as the mandatory chapter on burgeoning separate subculture Steampunk, there’s also an extensive look at how Japan has picked up and sprinted with the dark designs of Goth. Entire city blocks in Tokyo seem to be inhabited by manga-style Elegant Gothic Lolitas that put the Whitby Old Town to shame! 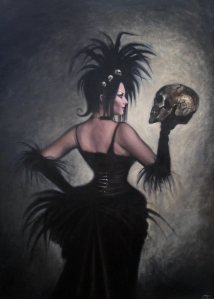 The few suggestions I could make acknowledge that the book’s focus is the imagery and artistry of Goth – it’s not a broader history, like Worldwide Gothic or Mick Mercer’s retrospectives. Expect to read a specialist text that might overlook details it considers irrelevant – The Art of Gothic should complement your Dark Library, not be a core text.
I would have enjoyed some full interviews with some of the artists who contributed, perhaps to break up the flow of text – the decision to use snippets here and there as captions felt like appetizers rather than a full meal!

Still, The Art of Gothic excels at being both a fantastic introduction for the intrigued and artistic non-Goth, as well as a rewarding read for any veteran alternative types. It’s an expertly woven tapestry of all the colourful and unique threads that make up the iconic history of this enduring subculture.
Everything is meticulously recorded in Scharf’s media-honed writing, that is accessible and entertaining in equal measures. Her contributors are to be applauded for ensuring this book is well-sourced and full of unique perspectives.

You can order the book directly from Scharf’s own website, as well as picking up Worldwide Gothic and some back issues of the sadly-defunct Meltdown Magazine all for an early Christmas gift. I highly recommend adding this gorgeous grimoire to your black shelves!

Natasha Scharf signs my copy of The Art Of Gothic

News, reviews and other articles written from the UK Goth subculture
View all posts by The Blogging Goth →
This entry was posted in Uncategorized and tagged Art, bands, book, goth subculture, history, media, music, PR, review. Bookmark the permalink.

3 Responses to “The Art of Gothic” by Natasha Scharf – Review