Seven Songs that Shaped You: One

One of the many ‘tag a friend’ chains doing the rounds on Facebook at the moment is ‘Seven Songs that Shaped You’. Normally I forget to ever attempt these, but it strikes me that it would be excellent look at what songs really defined me as a person, ensuring my ongoing love for Goth music – and maybe beyond? We’ll have to see where this exercise leads! First (and last, and always) has to be The Sisters of Mercy.

Tired and emotional at the Sisters in Leeds, 2015

My all-time stand-out number one band, despite Eldritch’s stolid protestations down the years about being ‘Goth’. I respect any band’s desire to reinvent themselves, to avoid being pigeonholed, and I’m part of that small but loud (in every sense of the word) group that rocks up at Sisters gigs in the most garish shirts I can find.

Like a good babybat growing up, I used netgoth.org.uk to advise me on what tunes I should be listening to, and hit the shops accordingly. After a few spins of Floodland – probably one of the first albums I ever bought – I found Lucretia grabbing me each and every time. It was also one of the few tunes I could rely on the DJ at our local ‘alternative’ club to grudgingly play, early in the evening, before turning to the rap-metal or whatever filled the dancefloor more.

But it wasn’t until I started collecting bootlegs that I found a whole new level of appreciation for the Sisters – and it reached perfection for me, back when it all started, with the Teachers / Adrenochrome medley.

That pulsating bass line hooked me in and never let go, even as various other Sisters anthems rose and fell in my estimation. The jagged beauty of Leonard Cohen’s lyrics was immediately apparent, and I could see why it had fired the imagination of the young Spiggy – his delivery, in a throbbing and warbling voice that is at such odds with the rest of his career as a gravel-throated crooner, seems permeated with pure youthful enthusiasm.

One of the earliest Sisters demo tapes, with thanks to the Sisters wiki pages

The medley was part of the very first Sisters gigs in 1981, and I dream of being there when the drum machine suddenly surges into a new gear and the guitars shred in. Eldritch’s voice takes on more of that superior nasal drawl, packed with delay and reverb, as he begins spitting out his lyrics, including the eternal brilliance of DREAD IN MONOCHROME – a phrase that I should have tattooed someone on my pale flesh in salute.

It’s far more punk-sounding, owing more to influences like The Stooges than contemporaries like the overly-dramatic Bauhaus, or sparse and barren Joy Division, whom the Sisters suffered from repeated comparisons to. I love both of those bands as well, but to lump them all together is to do each of them a serious disservice.

The Sisters of Mercy would transform many times from when they took off – the gloomy, rich and dark sounds of First and Last and Always, through the synthetic coldness and delirious bombast of Floodland, to the snarled and ironic AOR of Vision Thing, before they adopted their current banner of, well… whatever describes the heavy, slow-paced, low-burning thinking-man’s rock of tracks like Suzanne, Summer, Romeo Down, Slept… 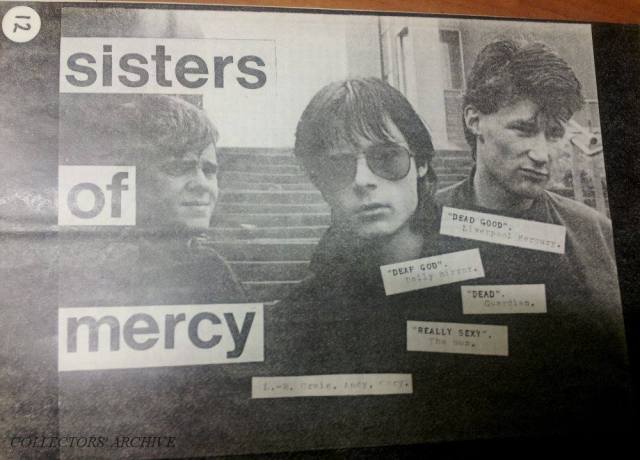 A fanzine photo of the Sisters, after their third ever gig – with thanks to the great people of My Heartland

Yet Teachers still finds its place in the modern live set as well, occasionally, as part of a medley with the deadly and sultry ‘On The Wire‘, which it fits with like a hand in a glove. Much like the band itself, the songs can be reinvented and reintroduced to a brand new audience each and every time.

I’ve loved and left many songs throughout the Sisters catalogue, but if pressed, I will always return to those very early days, where they first broke ground with aggressive, punk-infused live shows, showcasing the acidic wit of Goth’s lizard king himself. Despite his protestations to the contrary.

News, reviews and other articles written from the UK Goth subculture
View all posts by The Blogging Goth →
This entry was posted in Uncategorized and tagged band, bands, fun, links, music, personal, response. Bookmark the permalink.

4 Responses to Seven Songs that Shaped You: One