We’re riding hell for leather into our second set of reviews of Whitby Goth Weekend, Winter 2016, having covered Friday previously. What better way to sound the call to battle, than with veterans of 2015 – Chasing Dragons! 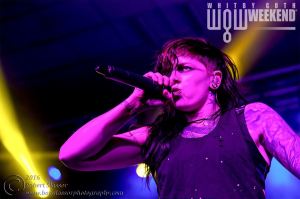 Tank crushes microphones with her bare hands to relax

These metallers are aggressive, fun and very polished. They’re spearheaded by the very confident, very talented Tank, who has a voice like a cruise missile – heavy, deadly and powerful. The whole band have an infectious energy, crucial for getting a half-frozen audience at a blustery WGW into the action.

This author isn’t a metal fan by any easy definition of the term, yet there’s something very vital about this skilled lineup, who deftly move between heavy and light rhythms, all wrapped neatly around Tank’s staggering vocals. They draw out the fan of engrossing music in everyone – then scare them to death with howled and screamed vocals of pure passion.
They’ve won fans at the top echelons of this festival, and when you look about, you see there are even more in the rows and rows of tight-packed fans crowding the stage. Chasing Dragons have earned the respect of a lot of discerning punters, in a field crammed with competitors. Credit to them.

Neil spots a smiling Goth, and demands his five quid

Truly delivering to the fans, next is a welcome visit from an equally veteran outfit, Children on Stun. These boys rock that Nineties sound something wicked, and it’s a delight to have them perform what is a relatively new gig so soon after their 2015 reunion.  But for Neil Ash, it’s like no time has been spent away. He wants to connect with the dedicated fans that follow his band like a religion, and from the sounds of it, he’s still connecting six or eight rows back! A vocalist with a wireless microphone is like a kite without a string.

Ash is brimming with passion for this gig, and his exuberance is exciting, for all it’s ironic a a Goth festival. He never forgets that though, and on some songs he utterly bears his soul and pours real, hard emotion into every lyric. The band’s newer songs can be slower and very raw, a hazard of their joint tragedy in recent years.

Even so, there is a mesmeric two-way relationship between band and fan. They chant the words they know, surge along to the beat, and deliver thunderous applause as Ash expertly weaves a close-knit community around them all. Children on Stun have given us some classic, hypnotic goth rock tunes that regularly rock nightclub dancefloors, and live they are no exception. Grab the chance to see these guys if you can.

Anne-Marie here stressing to other singers the importance of taking some time out for yourselves.

We’re really escalating the threat tonight though. If you like your Goth classic, look no further than West Yorkshire of course – and the irrepressible, unstoppable, Skeletal Family. Incapable of ever calling it a day, Anne-Marie Hurst and her merry men continue to remind us they were on the bleeding edge of this thing we called Goth back in the day – and also, they aren’t willing to rest on their laurels!

The band start like they’re fired from a gun, crashing in effortlessly and stylishly. They really are red-hot professionals, and it’s a bloody joy to see them laying down polished ebony goth-rock class*. Anne-Marie remains a commanding and tantalizing singer, powerful and sly in equal measure as she teases and roars her way through the songs.

And what songs they are – it’s a credit to bands like Skeletal Family that Goth music remains so invested in its past. Rolled out, punched up and belted out to a new wave of fans, the band effortlessly fills the cavernous Spa with beautiful live takes on beloved classics.
Of course, it can’t all be black roses and sweetness – the band have some technical issues, arriving and departing the stage in a jarring silence. And occasionally, I struggle to hear Anne-Marie in the mix, other times hearing her signature banshee wail loud and clear. The Spa is no forgiver of imperfect sound balancing, and perhaps this was one of those times.

But I can’t rob them of the strength of their performance, built on cruel menace and sassy style, played to an absolutely rammed hall of besotted fans.

* I have written this exactly as I noted it down at the time. 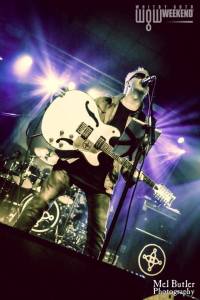 “Anyone fancy a guitar? Going (definitely not) cheap, one less-than-careful owner…!”

And so, faithful friend, we come to the last door on this dark advent calendar, and lurking behind is a fearsome Frankenstein’s monster of The Mission, circa 1986 and The Mission, circa 2016. Which is which? Let’s delve in and find out.

Hussey and his heavies have just finished terrorizing the English speaking world, and will go on to conquer the rest of the planet after Whitby. The dust has been well and truly shaken off, and a polished performing outfit stand before us, led by Goth’s leading silver fox. This gig is a high-water mark for their tour promoting Another Fall From Grace, their new album, and it’s going to be interesting to see what they sound like live…
Well one thing’s for sure, they aren’t The Sisters. The band deliver Garden of Delight, a version many of us have heard Hussey’s old bandmates demo years and years before – but The Mission’s version is a snarled, angry remastering that slams the door on any Eldritchian comparisons.

Which is no bad thing of course. Indeed, Hussey demonstrates human traits of compassion when a missing child – no, really! – is reported to venue staff. The Mission’s main man orders the lights turned up until the trespassing toddler is retrieved. All’s well that ends weird!

Returning to the scene of the crime, we are rewarded with His Master’s Guitar. That classic twelve-string strum defined a brace of Mission albums, and Hussey still has it in spades. At the back of my ear, however, I can hear the sound dissolving into the hungry corners of this intimidating venue. Sound techs will struggle in vain against this voracious beast. To calm tempers, the talented Evi Vine adds a Regan-esque ethereal aura that glitters against the goth-rock gloom of The Mission.

Oddly enough, the audience hasn’t fully engaged beyond the hardcore at the front. Even Wayne observes how relatively collected the crowd has become, and even the intro to Severina doesn’t seem to stir a shout as I would have expected. But, then, a defiant tower of the dedicated rises, defiant, and I wonder if venue security might be somewhat to blame for matters… 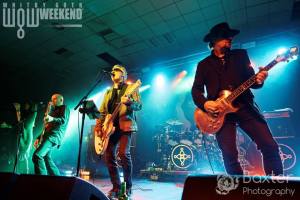 Maybe. Tower of Strength suddenly hits home with a hammerblow of rock and roll. Every instrument is a perfectly balanced and perceived sound, whirlpooling around a roaring Hussey at the heart of it all.
Now the crowd are fully complicit, waving banners and stacking one another like it’s the mid-Eighties. Another Fall From Grace is a beautiful remastering of that classic Mission sound, but for these hardcore, long-term fans, they really want to hear those tunes they heard, brand new, all that time ago…

The Mission depart the stage just long enough before Wayne and Evi return, to deliver a few stripped-down acoustic tracks for the audience. It’s a gamble, to depart from a blazing rock-and-roll gig to a slow-burn set, but after a few gentle and enjoyable anthems, the entire band return with gusto.
Again, my memory is deserting me, and my notes are dissolving into wine-soaked nonsense. I’ve written “A storming version of Blown Away”, and then the band depart and return for a record third encore. I noted it was half-midnight, with no signs of this gig slowing down. I noted down “Never Longer Than Forever, that quirky holiday tune!” and then I just tailed off. I have a vague, brightly-lit memory of Wayne Hussey hurtling about the stage, and a sea of people rising and falling like a mad tide.

It was the kind of gig that blended effortlessly into a bizarre waking dream. The Mission delivered a first-class, knockout show that seemed to be as much fun for the band as it was for their delirious and devoted fans. Simon Hinkler, whose dry mini-blogs on tour with the band have been a source of delight, later confirmed he found WGW one of his favourite gigs – out of a worldwide tour!

“Down in front!” Said nobody.

Such high praise is a testament to the unique experience of catching your favourite band at Whitby Goth Weekend. It’s a beacon of excitement in a disintegrating live music world. Support your bands by attending festivals, and they’ll reward you with a blinding show.