No Shoes, No Shirt, No Soul – No Service! 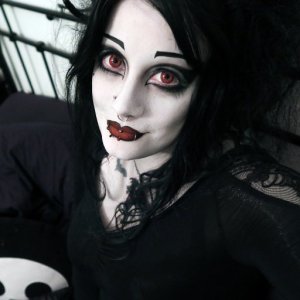 It is disappointing to read, so soon after positive action against discrimination in the UK, of the uncomfortable experiences of a Goth abroad.

YouTube sensation Black Friday was visiting Paris, but was asked to leave the world-famous Musée du Louvre by security before even getting in, according to media in Black Friday’s home of New Zealand.

The Louvre’s security reportedly told the couple their clothes and hair would cause too much attention to be drawn to them, and people would want to cluster around and take photographs with them.

I am sure it’s very flattering to be perceived as more attractive than the legendary artwork and artifacts held in the Louvre, but this seems a spectacularly bizarre issue for museum staff to have.

The issues did not stop there. When attempting to visit the famous Père-Lachaise cemetery, Black Friday and her partner were confronted with even more hostility.

This chimed with me very much, as I visited Paris for the first time a couple of years ago, and like many, made a pilgrimage to Père-Lachaise and the final resting place of icons like Oscar Wilde and Jim Morrison. Here I am by the grave of the original gothic-rock singer. 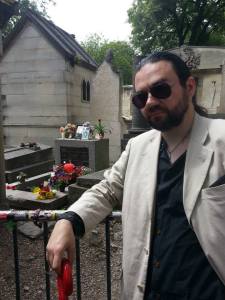 Did I encounter any hostility in the cemetery? Anywhere in Paris? No.
Perhaps this is because I’m not half as elaborate as the beautiful Black Friday – but the ugly suspicion there is that we must modestly comport ourselves to avoid upsetting conventional, mainstream people.

My personal attitude has always been to reserve my gaudiest finery for clubs, environments guaranteed to be ‘safe spaces’ – just call me the blackest snowflake! Obviously my opinions are just that, opinions, and certainly not binding on others. Black Friday deserved in no circumstances to be made to feel unwelcome or even afraid, and should be allowed to attire herself however she feels, insofar as she at least complies with the law!

Everyone should. As a Goth, I’ve always resigned myself to some unusual public reaction – across Western Europe, this has differed from place to place. The Italians regard me with askance query, the Germans with friendly fascination, the French and Spanish barely registered me. The rest of the world, I have yet to visit.  England, however, has always felt like the most hostile, ironically enough.

I’d be fascinated to hear from any foreign Goths who’ve traveled to the UK, and their experiences in public as a result.  Because so far, the safest I’ve felt as a Goth, has been abroad.

UPDATE: Whilst browsing the /goth subreddit, I noticed an interesting comment from a French citizen that I think provides some balance to this story.

News, reviews and other articles written from the UK Goth subculture
View all posts by The Blogging Goth →
This entry was posted in Uncategorized and tagged goth community, goth subculture, incident, media, news, personal, response. Bookmark the permalink.

5 Responses to No Shoes, No Shirt, No Soul – No Service!