“There goes Tim Sinister”, you’ll say. “Stereotype Trad Goth,” you’ll say. “Wishes he was Eldritch but, you know, still with hair. ” You’ll be right too, and it’s only a matter of time I ink myself with the head and star and wish I was back in the Eighties.

I harbour a dark, dark secret though. Long before the appeal of aviators and cowboy hats, before I had an inkling of the dark side, I was into another robotic beat – the type Germany exported so successfully in the late Eighties and early Nineties. So it was no surprise I should find a welcoming home in the cyber-goth end of the market, and got into a fair amount of EBM and electro stuff. 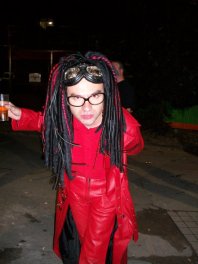 Like so many before me, I made a pilgrimage to Leeds – Goth City – so the world-famous Infest was right on my doorstep. Running since 1998, it was originally suggested as a bit of DIY local promotion for West Yorkshire’s still burgeoning Goth scene. When they booked Apoptygma Berzerk in ’99, the transition to full-on bleep was pretty much complete. Now it’s a three-night extravaganza, jammed full of world-class heavyweight bands, crazed DJs determined to shatter bones with heavy beats, and a market boasting all kinds of shiny clobber destined to make your bank balance sob.

I made it to the tenth anniversary and came back a few more years, always loving it – the music but also the social angle. Anyone can tell you Goths are gregarious creatures and nothing brings us together like booze and a boogie. Eventually though time, costs and a relocation further North made it harder to get down and get down.

Until the stars finally aligned. My blog began gathering speed and followers, and I started posting regular – if incoherent – live reviews from Whitby Goth Weekend. I made friends with Chris M, one of the original Infest founders. Other friends were driving down from Newcastle, and the accommodation – if you catch it in time – is laughably affordable.

So I’ll be racing down on Friday 25th August to gather my first ever Press Pass for Infest, and you’ll be able to follow me through my myriad social media channels as I browse the stalls, drink the booze, watch the bands, drink the booze, listen to the DJs, booze the drink and generally get into mischief whilst attempting to scrape together a review that somehow encapsulates the FIFTEEN PLUS bands that are the beating heart of Infest 2017. Beating pretty fast as well I don’t doubt. I’m especially holding out for heavy-hitting headliners like Die Krupps and Rotersand.

Tickets are still available – just – so get yourself a place at the festival of the future. See you there!

1 Response to Infesting 2017: The Blogging Goth Goes To Bradford