The moment I saw the headline, I did a sort of combined cringe and sigh. “Vampire Gay Goth wants to add black stripe to LGBT rainbow flag”, boggled the Lancashire Telegraph, an esteemed title probably more concerned with neighbourly disputes and weather turmoil. Instead, the article is doing a booming trade in the usual horrific drivel inhabiting any comments section on the internet – their advertising department will be happy at least.

A disclaimer should come first – I’m a straight man and thus cannot speak with authority on LGBT matters. I’ll defer wherever possible to those more qualified to speak.

On with the tale then. Meet Darkness Vlad Tepes, who just one-upped you as a teenager when you tried to get people to call you ‘Raven’. He’s no stranger to the media, having already asked the public to ‘treat him like anyone else’ – in an article where he acknowledges he drinks animal blood, sleeps in a coffin, and visits pubs in a tiny Northern town decked in mourning finery, only to be affronted when he’s subjected to abuse.

Put simply, Darkness – or Mr Tepes as the paper superbly calls him – is not like ‘everyone else’. No kidding. I’d like to stress as well, he’s not like other goths – I know too many vegans who recoil at the thought of animal blood, too many old post-punk music fans who scoff at wannabe bloodsuckers, too many people with Cure t-shirts who have no patience for this kind of pantomime schlock-horror. I strive to accommodate all the various odd factions under the flapping black banner of goth, but not when they lead to headlines from Pink News, the leading online LGBT+ voice, who describes his activities “as part of his vampiric goth life”. That is the sound of more of our meagre hoard of respectability being chipped away.

“He’s not like other goths”. That’s what I want you to take away from this article. I wildly presume to speak on behalf of the goth subculture, and I hope they would agree with me that this is juvenile attention-seeking that does our fun (no, really!) subculture a disservice – and an even greater disservice to the ongoing worldwide struggle for recognition and acceptance of the LGBT+ community.

His actual complaints aren’t grounded in any sense of reality. To support his ‘campaign’, he claims

I can find no evidence that goths are not welcome in any gay community, and vice-versa – you can see in some of the tweets below. Tepes seems to be describing some narrow personal anecdote that I do not believe exists outside his world-view – and therefore is undeserving of the level of disruption it has caused.

Trans goth here. I doubt many members of either community would feel the need for any amendments to the LGBT flag. I’m having trouble taking this article seriously at all.

As someone who is a transgender lesbian goth, I actually thought this article was satire when I read it.

The LGBT community are fully accepting of me as a goth, while the gothic community fully accept me as both a trans woman and a lesbian.

There is no issue here.

As a bi, trans goth this is fucking unnecessary and stupid. Don’t conflate a fun subculture with a movement to fight against oppression based on sexuality and gender identity. Should we add add a tail/paws for furries too? Come on.

For additional clarity, I reached out to Queer Alternative, who are not only already carrying out the hard work that Tepes seems blissfully unaware of, but also work to promote the visibility of alternate sexualities within alternative subcultures, including punk and metal. They responded promptly, explaining how they cheerfully mix and match their own imagery with the accepted symbols of LGBT+.

“The Queer Alternative is a UK charity which works to promote the visibility and acceptance of members of alternative subcultures within the wider LGBT+ community and raise awareness of the presence of LGBT+ people within those subcultures.

As part of this work we take part in Pride events and parades across the UK. As well as carrying our distinctive black and white banner, members often carry rainbow, trans and other pride flags as symbols of our diverse community.” 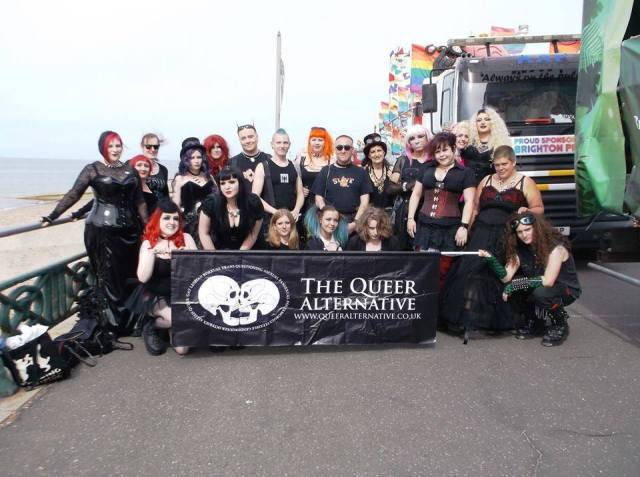 Image courtesy of The Queer Alternative

Grown adults, cognizant of their own sexuality, can easily navigate the purely hypothetical situation he lays out – clumsily – regarding confusion around their interests. I doubt a hasty modification to a flag will change how people in alternative subcultures navigate alternative sexuality. The whole concept is a glitter-storm in a gothic goblet, and I sincerely look forward to it blowing over.

As we close off an article I never imagined I’d have to write, I wonder – instead of a black stripe on the Pride flag, how about some Pride colours on a traditional symbol of the goth scene? 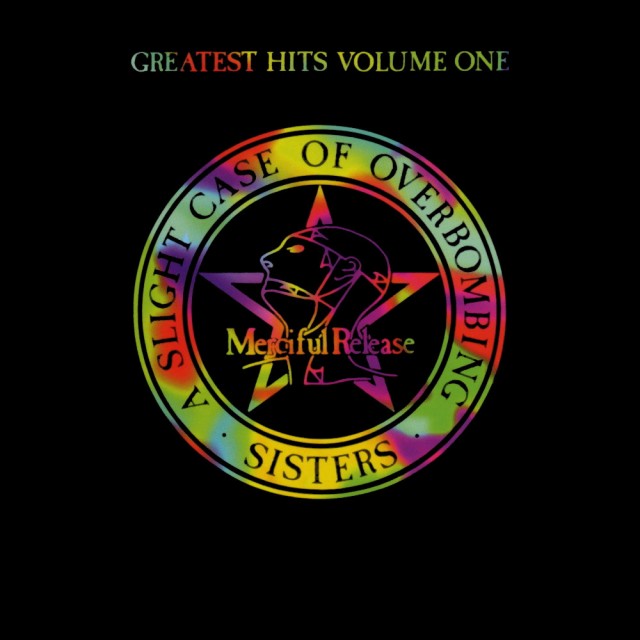 Image Courtesy of The Sisters of Mercy

News, reviews and other articles written from the UK Goth subculture
View all posts by The Blogging Goth →
This entry was posted in Uncategorized and tagged internet, media, news, PR, response, vampires, wtf. Bookmark the permalink.

4 Responses to Black Rainbows – the Pride Flag and Goth