Four Decades of Face-to-Face: “The Scream” released this day in 1978 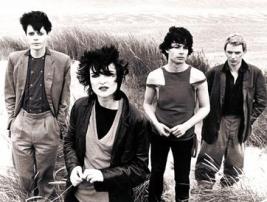 One of the most recognizable bands in the goth pantheon, Siouxsie and the Banshees released their debut album “The Scream” on 13th November 1978. They had impeccable punk credentials, would go on to be populated by a talented brace of musicians including Steven Severin, Martin McCarrick, Robert Smith and John McGeoch, and all led by the mesmeric Siouxsie Sioux, an indecipherable silent movie star turned furious postpunk prophet swathed in the timeless fashion of the underworld that would become a universal constant for an undying subculture.

Their origins are fascinating – Sioux and Severin formed the band on a whim, with an opportunity to play support to the Sex Pistols that Sioux, a fervent fan, didn’t want to miss. They can later boast they played one of the earliest ever punk festivals in 1976, on stage with the likes of The Clash, The Damned and the Buzzcocks.
The band amazingly busked the whole thing, improvising a twenty-minute set with Sioux reciting random memorized text including The Lord’s Prayer. It probably didn’t help they had Sid Vicious behind the drums in this first ever lineup!

Despite an urge to split the band up, some fast talking ensured the Banshees stayed together, and ascended quickly to dizzying heights – magazine front cover material, an appearance on Tony “Mr. Manchester” Wilson’s show So It Goes, and a Peel session all in the can by ’77. Next they needed that debut album, and after a guerrilla, punk-promo campaign of vandalism around London by a fan, Polydor delivered a contract in June ’78 that the Banshees signed.

There was one frantic week in August when they recorded The Scream, and it spent the next three being produced, mastered and polished. The result catapulted into the music journalism world like a divebomber, scattering glowing reviews everywhere. Melody Maker praised the sound as “strong, abrasive, visceral and constantly inventive.” Kris Needs, writing in Zigzag was effusive, saying

It is certainly a special classic to join milestones like Diamond Dogs, Roxy Music’s first and (Lou Reed’s) Berlin.

Rolling Stone called it a “striking debut album” and prophetically described their music “…acknowledges the enduring power of the Old Wave, but yields not an inch in its assertion of the New.”

It’s a brilliantly accurate description. Even in this first recording, you can hear Siouxsie’s strident, challenging tone enveloped by icy expanses of discordance, and hypnotic pulsing rhythm.
It’s clear they’re going to tire of the restraints of the contemporaries in punk, and even post-punk, and aspire to something newer and darker. By 1981 they had that down with the darkly delicious fourth album Juju, helping set the boundaries of what we now know to be goth rock.

But right now, time-travelling back forty years exactly to 13 November 1978, the Banshees have an album that only hints at their vast, exploratory future and the eternal mark they’ll leave on untold generations of fans and follow-on musicians. It’s revelry and rawness and a riotously good start for a band who’ll reach further than they can probably imagine at this moment…

Thanks for reading – as always, I hope you enjoyed it! I’ve taken the decision to take all the advertising off The Blogging Goth now. Instead, I’d be grateful to my readers for chipping in a bit and helping pay for my domain subscription, general operating costs and even putting towards making brand new content!

Don’t worry if you can’t, or it’s just a pound every now and then. Every bit helps keep the site afloat!

News, reviews and other articles written from the UK Goth subculture
View all posts by The Blogging Goth →
This entry was posted in Uncategorized and tagged band, bands, links, music. Bookmark the permalink.