First and Last and Forever: The Sisters’ debut album 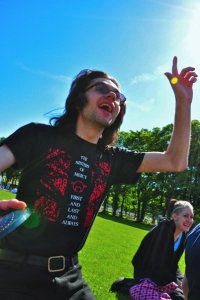 I should lead with a confession. The first Sisters album I listened to was 1987’s Floodland, and it made a more significant impact than their debut ever did.

How could it not? Eldritch was in top form, flush from victory over his treacherous minions and armed with the pulchritudinous Patricia Morrison and devoted Doktor Avalanche to produce his ultimate vision of The Sisters of Mercy. The techno-experimentation of the ‘Sisterhood’ era gave way to a polished collection of icy synths and sneering superiority led by three of the finest singles the band has ever produced. Less than a week ago I saw The Sisters of Mercy live and they ended on the triumph that is This Corrosion – still a potent weapon in the band’s live arsenal.

And yet, for all Floodland is a finely honed, bombastic blast of Sisters creativity, it is to First and Last and Always we must look for what I believe to be the ‘truest’ sound of this most definitive band. To many fans, the cowboy-hat wearing smoke-wreathed silhouettes are the golden-age lineup – Gary Marx, Andrew Eldritch, Wayne Hussey and Craig Adams, clawing their way up the indie charts and into WEA’s signing book, before breaking into America in debauched and doom-laden style.

They’re also tasked with creating an album. The demon bastard overlord himself, riding high on control-freakery and amphetamine abuse, tinkers endlessly with EQs and lyrics to the frustration of his more prolific bandmates – the bones of early Ghost Dance and Mission songs can be found in the graveyard leavings of the studio floor at this time…!
Plagued by his many demons, Eldritch is hospitalised and the album pushed back – although he’s back on his feet sufficiently for the Black October tour in support of an album that doesn’t exist!

The singles instead come out – Walk Away in October ’84, and No Time To Cry in March ’85 – and neither bother the Top 40 too closely. The album itself came out soon after – thirty five years ago today in fact. It should have been the opening salvo of the triumphant rise of The Sisters of Mercy – instead, it was the merciful kill of the last bullet. The relationship between founders Gary Marx and Andrew Eldritch had been disintegrating for quite some time, and on the 1st April Gary performed his final gig. He elected not to turn up for the Royal Albert Hall gig on 18th June 1985, the fabled filmed finale of the First and Last and Always foursome, now a tired triad.

When Eldritch clashes with Adams and Hussey over the tracks for the next album, the friction spills over. Adams is out on a tirade, with Eldritch literally washing his hands of the pugnacious bassist. Hussey, the newest recruit, agonises over his actions before being galvanised by Adams into splitting off into ‘The Sisterhood’… ah, but that’s a story for another day.

Yet amidst the collapse, we must recognise that it is these fractured and frustrating few years leading up to March 1985 that produces this pillar of goth-rock sound (despite Von’s strident denials)!

All of this vicious infighting and chemical abuse was a catalyst in the recording of the debut. Compare it to its descendants – the cynical AOR and American nightmare of Vision Thing, or the crystal-cold nuclear Armageddon and cruel sex of Floodland are both overblown creations meticulously planned by the unrestrained architect Eldritch. Only First and Last and Always is a true combination of an entire band’s songwriting strength and the raw nature of Andy ‘Spiggy’ Taylor, confronting – for me – his true feelings about love and death and all that good lyrical source material.

The heartbreaking Marian is a firm fan favourite and probably the most definitive ‘dirge’ song they ever produced. For trivia fans, the (Version) after the title is a classic Eldritch sneer, a dig at the record label who complained his gasped and hissed vocals were too quiet.
Contrast with ‘Amphetamine Logic’, an appropriately frenetic dancefloor smash riddled with paranoid fears, lovers betrayals, chemical dependency and violent repercussions. It is not hard to believe the making of this incredible debut laid the Prime Sister low!

Very little compares to it today. Look at the current line-up’s willingness to play Vision Thing in it’s entirety, versus the fact that Nine While Nine hasn’t been played live since the Eighties. 1959 is a beautifully understated number on Floodland, but for stripped-down saddening horror, I’ll take Blood Money or On The Wire any chance I get – and those only existed as bootlegs for decades, too!

If you want to see Eldritch’s songwriting at its most significant, set to the Sisters’ musical style at it’s most dramatic, you’ll pick First and Last and Always every day – forever.

You can now become a patron of The Blogging Goth and enjoy influence over future articles, credit for your contributions and keeping the site ad-free!

News, reviews and other articles written from the UK Goth subculture
View all posts by The Blogging Goth →
This entry was posted in Uncategorized and tagged Andrew Eldritch, history, music, personal, review, the mission, the sisters of mercy. Bookmark the permalink.

4 Responses to First and Last and Forever: The Sisters’ debut album