Right now, we should all be in Whitby enjoying the sounds, shopping and socialising with our favourite festivals. Instead, of course, all is delayed. So I thought I’d publish my review of last November’s Spa event, Tomorrow’s Ghosts Winter 2019 festival – let’s remember how it was and look forward to when it will be again!

In the meantime, you can get online and browse some of the traders that would attend Whitby Goth Weekend or the Art D’Morte Exhibition.

Regular readers of the blog will know that my unavoidable occupational hazard is missing the first Friday band due to whatever disasters have struck as I’ve tried to reach Whitby! My apologies to Alterred, who have been performing to rave reviews for over a decade. Enjoy their evil electro-rock below!

I arrive in time to catch October Burns Black – pure, vintage goth rock. They tick off every cliche from the list, sporting hats, shades, copious dry ice and drawling baritone vocals. With (dark) shades of Fields of the Nephilim and The Sisters of Mercy, they also channel the next stage of evolution, from Nineties bands like Rosetta Stone and Nosferatu. October Burns Black perform satisfying, slow burn tradgoth that will cheer many a dour old fan. My only recommendation is to relax and trust in their skills as a band on stage – they came across a little frozen at times and the transition between songs was stilted.

She Past Away were a massive draw for me and many others – and they absolutely delivered! Their style is effortless, minimal and yet possessed of a huge sound. Their songs are hypnotic, expertly weaved soundscapes of dark malevolence hinting at hidden and dangerous depths. The entranced crowd were hungry, and hooked on their dark energy.
When the duo suddenly chose to break out faster songs, they started and stopped abruptly yet perfectly, a masterpiece of coordination. The glory of hearing She Past Away is a rare treat where the music takes centre stage, and the vocals are a hinted at menace just out of perception. A standout performance, and special kudos to the promoters for their booking. 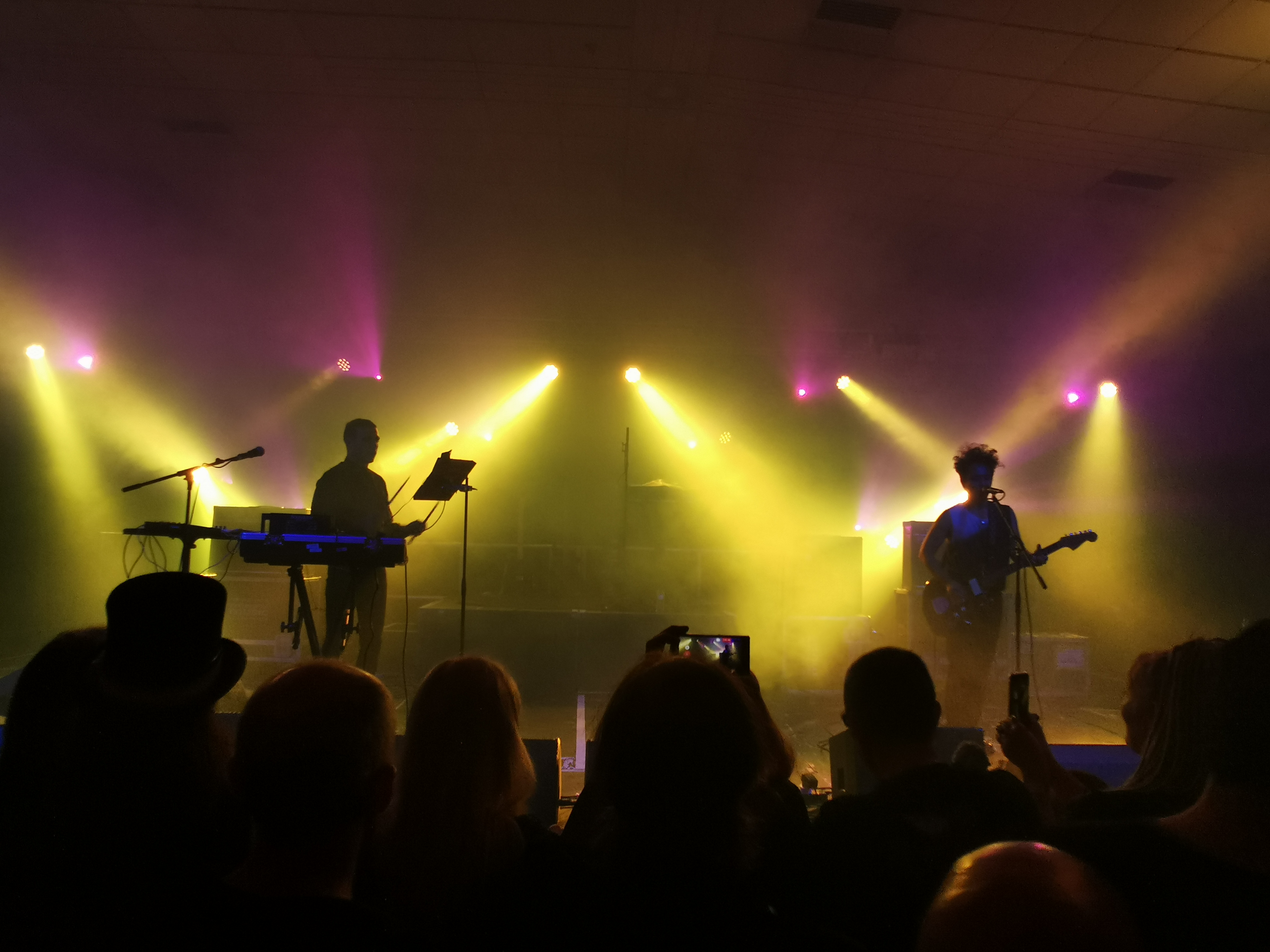 A textbook headline performance from the veteran Clan of Xymox. The Dutch darkwavers had amazing energy right out the gate, kicking off with a furious intro to fan favourite Stranger. The band are vibrant, active, utterly honed and in the zone – perfectly sound-tracked by the timeless near-future music they make. Their vocalist Ronnie Moorings is wonderfully relaxed and friendly, bantering and even chatting about the weather with us!
Yet this isn’t at all to suggest that they’re unprofessional – even when their drummer strides about the stage, battering a tiny hand-synth with pantomime over-enthusiasm! Clan of Xymox have an incomparably awesome presence and I’m particularly pleased to report the sound is balanced just right – it fills the cavernous Spa perfectly. Coupled with a wonderful stage show and a slew of classic tracks, it’s a triumphant end to Friday night. 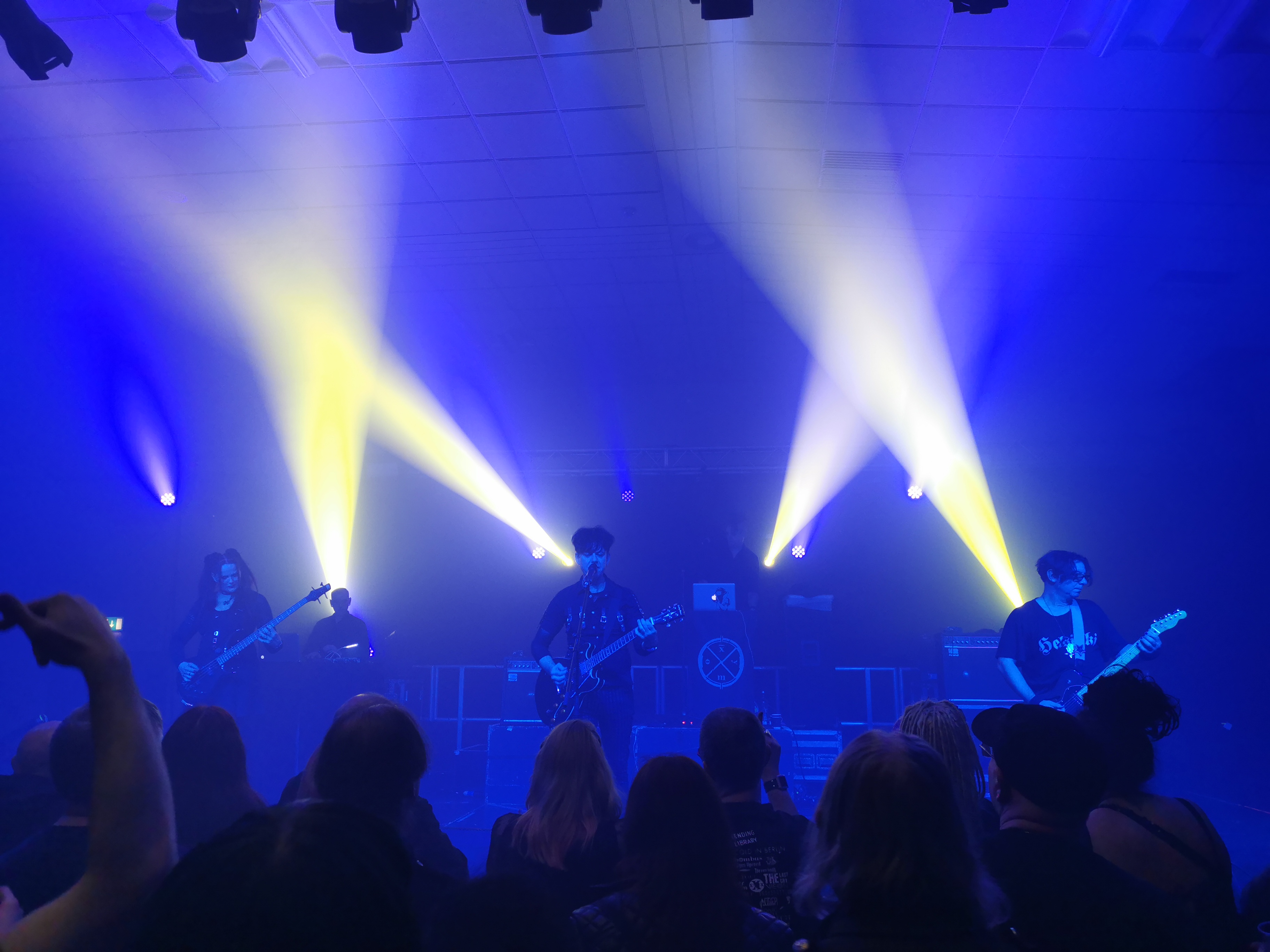 Saturday immediately kicks off with startling scenes from the genre-busting, hair-raising howled terror that is Syd.31. They have overwhelming energy coupled to a fantastic stage presence, and yet still struggles to engage the first comers on Saturday night – which has always been a challenge since live music began.
Their music is aggressive, complex and perhaps of singular appeal to just those who like their music in the style of scream/horror/noise/techno/metal/???.
Their lead singer takes time out to remind us to support those who need help with depression – in a very angry and positive manner! They gleefully end on a mangled cover of Mr Vain. Truly boggling, but strongly recommended for those venturing far out of their comfort zones!

It’s a warm welcome to veteran goth rockers Grooving In Green who are beloved of the scene, especially in Yorkshire. They’re tight, snappy and catchy with live drumming pushing their fast-paced trad anthems, featuring heartfelt vocals from the passionate singer, Tron.
After a few tracks though, I notice I’m hearing a lot more of the vocals in the mix than anything else. The guitars are quiet and the bass is almost hidden, but kudos to the sound desk who balance them again and… then it’s just Tron’s trademark gags that get me rolling my eyes! An excellent performance by GiG who deliver satisfying slabs of energetic goth rock with a big black heart full of emotion.

Brimming with dark energy and wonderfully energised by a live fiddler on stage, the formidable Inkubbus Sukkubus draw a solid crowd of dedicated fans. Full disclosure, I’ve always found their subject material leaves me a little cold – but they play with such flair I’m entertained despite it! Even my shaky grasp of their discography appreciates their canny mix of hits and album tracks known to the more dedicated fans, so everyone can come away entertained.
Even if you aren’t a fan of pagan magic and mischief, there’s a nice cover of Paint It Black, and through it all, Candia McCormack is a whirling dervish of magnetism, flair and talent.

Stylish lessons from a goth-rock titan, as Wayne Hussey now appears with flowing silver locks! Accompanying this Romantic look are The Divine, an epic orchestral outfit of strings and piano, that go on to deliver emotion-choked slow ballads. However, the nature of the music means the pace of the whole festival has shuddered to a reflective crawl. But for the faithful fans of The Mission, this must be a holy moment.

“You having a good weekend?” enquires Hussey, now at the end of a broad-ranging UK tour promoting his autobiography (part one), Salad Daze.
“Yeah!” comes the enthusiastic response.
“We’ll put a stop to that then” he quips effortlessly.

There’s hearty chuckles but I increasingly think that if you aren’t a hardcore fan of t’Mish this might not be your scene? I imagine the standalone gigs have been magical, but as headliner at a festival, I think there’s an expectation to deliver a set of more broad appeal for the people who maybe aren’t your fans?
However, he wraps up the main set with an intriguing acoustic version of Tower of Strength, and encores thereafter include a solo ending on Wasteland that medleys into Like A Hurricane… and then Personal Jesus! I love a good mash-up, even though we have to sing to keep pace for Wayne as he forgets the lyrics! Chaotic scenes indeed, but wonderfully enjoyable thanks to Hussey’s classic charisma.

So an unusual culmination for Tomorrow’s Ghosts Winter 2019, where I’m sure the devout followers of The Mission had a divine experience, but for casual fans like myself I was left firmly on secular Earth. Still, I ultimately came away energized by the willingness of the artist, and the festival, to try something different and unusual and unique that set this performance apart from every other. It’s a commendable initiative!

My Whitby experience this winter was otherwise a quiet one. I enjoyed the inaugural Goth at The Brewery gig on Saturday, although I strongly encourage the organizers to prepare sufficient logistics if you mention an event including beer, goth music, and no entry charge in future. More toilets especially would go down well!
I am assured they are taking these lessons onboard and will be holding another gig during the festival season… which I can only recommend from a truly selfish point of view! 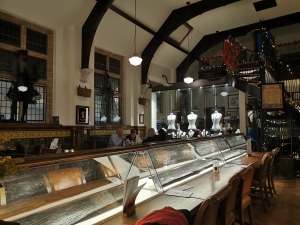 I also enjoyed newly opened Albert’s Eatery in the perfect surroundings of the town’s Wesley Hall, recently renovated and turned into a Museum of Jet during the day.
A beautiful location filled with awe-inspiring relics of this beautiful stone, the menu is expertly crafted and friendly to vegans and vegetarians alike, served by welcoming and confident staff. Another strong recommendation from yours truly! 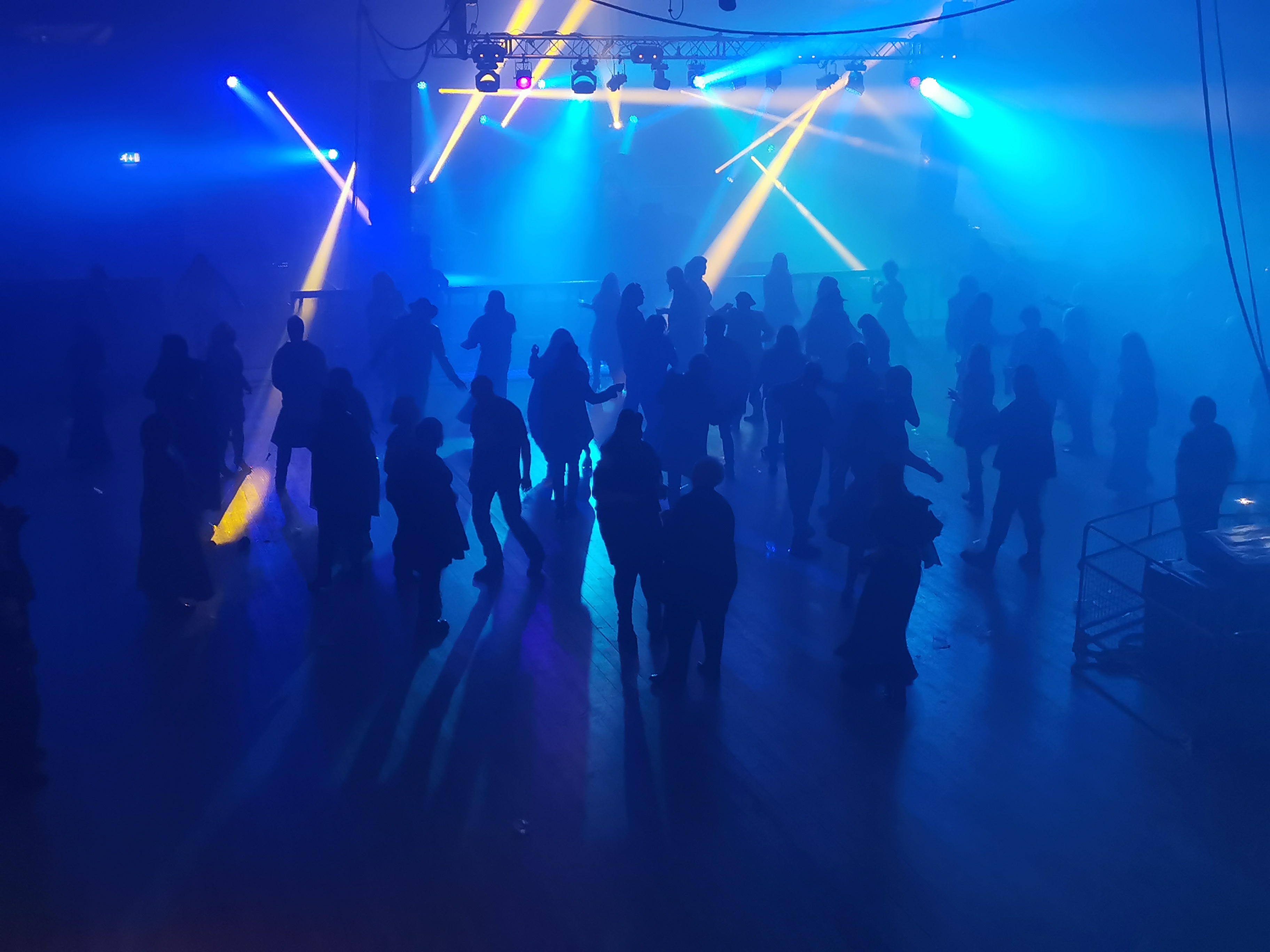 Now we look down a long, empty calendar to the rescheduled dates for Tomorrow’s Ghosts Festival of 30th October – 1st November. The important thing now is to get ready to rally around beleaguered small events who may be hurting from the isolation – and their attendant staff, traders, artists, crew, accommodation and the entire ecosystem of people who depend on our patronage. See you in Whitby soon…! 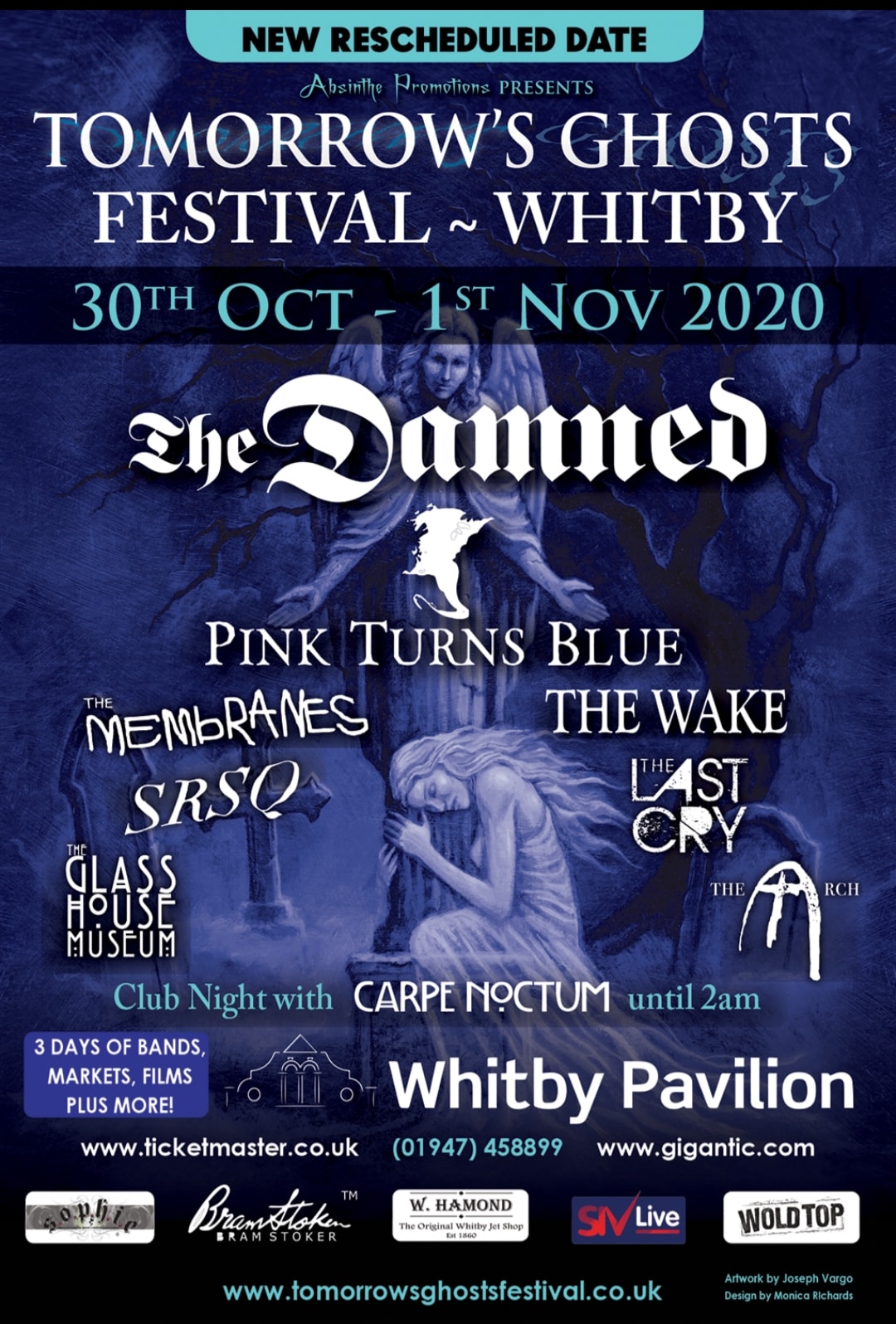 You can now become a patron of The Blogging Goth and enjoy influence over future articles, credit for your contributions and keeping the site ad-free!

News, reviews and other articles written from the UK Goth subculture
View all posts by The Blogging Goth →
This entry was posted in Uncategorized and tagged bands, music, review, tomorrow's ghosts, Whitby. Bookmark the permalink.