Sunlight slants through the haze in the Spa,and it’s more impressive than any laser beam. It’s also a powerfully natural sight that befits this ethereal artist. “I see red” intones the horned performer from New Zealand, one woman with a guitar at the eye of an emotional hurricane of sound. 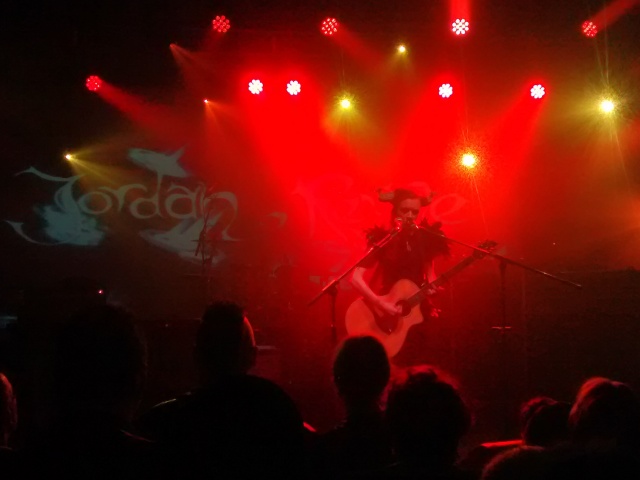 She speaks softly between tracks, friendly and softly amazed at the passion of fans who have headed down early to enjoy her unique style. Yet her lyrics channel a powerful rage that seems inspired by PJ Harvey or Patti Smith – “Pitiful man” she spits vehemently, a verbal dagger between the ribs.

She uses loop boxes, many of them, to sample and replay a single sound or a few bars of music, stretch them out into a clockwork melodic that nevertheless beats like a living heart, all love and hate in every ticking thump.

People might hear ‘folk’ and form an immediate, often negative opinion. This artist blows those conventions wide open, with songs like ‘Factory Nation’ that explode into the consciousness like a lightning bolt – and also sees familiar fans reaching for their ears in time!

Every time the audience applauds and cheers, it bubbles along so naturally, not polite acknowledgement but real passionate enthusiasm! We also indulge in wishing another happy birthday at the top of our bellowed voices, this time to Jordan herself who is spending her special day with a room full of drinking Goths.

They’re baying for an encore, and I don’t think I’ve ever heard that for an opening act – a real, palpable interest that unfortunately cannot be satisfied as the rest of the bands must proceed!

It’s a  sinful start for these irrepressible Whitby veterans who were voted the most anticipated band of the Weekend! Over footage of Blackadder behaving badly the boys thrash out a classic cover of the Pet Shop Boy’s “It’s a Sin”! The audience are bouncing crazy by the end, and it’s a fantastic atmosphere – they’re living up to expectations, and more!

Then the bastards decide to start showing clips from Carry on Screaming as they thrash out their slower and darker stuff! Still, it’s bizarrely cheerful, even madcap, helpers parade through with huge banners, and the audience is pogoing like crazy!

Settling down again, Protect and Survive is an especially impressive tour de force, injecting cold war paranoia into a dancefloor filling classic Goth track. Interesting trivia fact – The Blogging Goth himself has a cameo in the video to this track, made many years ago. See if you can spot him!

There’s clips of James Bond and Spy vs. Spy running behind them as well, it’s a hilarious pop culture mishmash. The boys are chasing each other about, yelling lyrics into each other’s faces – I’ve seen bands be consummate professionals but never seen one have so much fun!

“Chase” from their first EP is a surprising slow track, yet pounding and tinged with patient danger. It’s immediate how popular they were when they started with  menacing numbers like this. Operatic, gloating, and very enjoyable. Manuskript made a promise to their fans, and they delivered in fantastic, unique, style!

“I can’t believe it’s not Goth!” proclaims Mike Manuskript, and it’s a pie in the face to any po-faced Sisters clones for sure.

A welcome appearance from these fine indie maestros. They blasted their set wide open with “Swamp Thing.” There are no bad Chameleons songs, but they’ve started with a firm fan classic. Then Burgess, a Mancunian of few words, dedicates a song to Sophie Lancaster and simply launches into the stark and upsetting “A Person Isn’t Safe Anywhere”. Simply powerful.

They effortlessly weave songs of breathtaking depth, complexity and emotion. The Chameleons stand tall as a band of unparalleled creativity and we are supremely lucky to have them still performing with Burgess, delivering a sound that is utterly unchanged decades after being recorded, and yet sparkles with invention every time we hear it.

“Is there anyone there?” he asks during “Monkeyland”, and it’s more than rhetorical – beyond the hardcore fans (like your author) the crowd is quiet and contemplative. The band have always enjoyed a small but passionate chapter amongst Goths – and they’re all here, but admittedly it is a drop in the ocean of the supremely busy WGW. 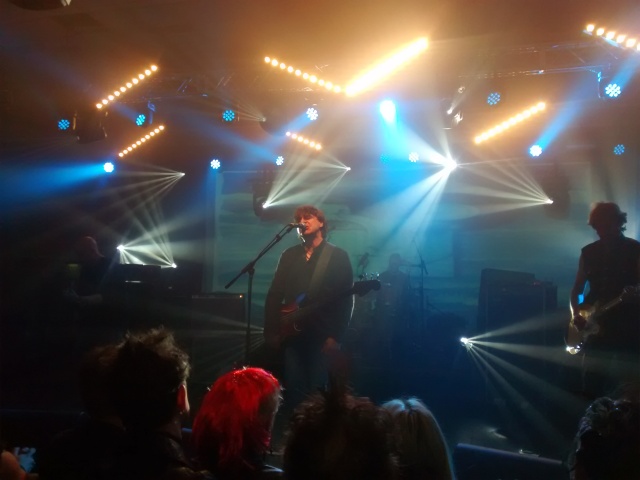 It’s here and now politics, “when you go for drink someone’s pissing in the water”, and if you have our government you know this too well.”Piss in my water and I’ll knock you out!” remarks Burgess. You don’t want to argue with him, believe me.

The anthem that is Soul in Isolation arises, and Burgess ad libs mid song, ” I’ve left everywhere I live.” It always feels like he’s improvising on the fly, like every performance is something new and unique, and for us dedicated few each gig is a damn present to be treasured.

They could play all night, I’m whirling in the pit with the hardest fans, howling along to the music as Mark Burgess pours out his heart from a taciturn soul. This for me is probably a very selfish high point of the entire weekend – I loved it, but very much in isolation.

He stalks the stage, Count Orlok in stark makeup, black slashes on his skin that turn color under the lights. Andi Sex Gang has arrived in Whitby from Neo-Transylvania during the nuclear apocalypse, and he has something horrific to poison your ears and soul with!

The bare minimum of musicians are backing up the diminutive death rocker, and he shrieks something that sounds like the end of days, then casually wishes Whitby a happy birthday. A split personality is behind the mike and none of us are safe!
He howls out a classic track, “Sebastienne” according to my blurry notes, and suddenly the Batcave is alive before my eyes – or do I mean scrabbling out of its shallow grave, rotten and undead?

It’s a beautiful cacophony of feedback and shrieks and Andi shepherds it like the most fucked up conductor this orchestra has ever seen. Forget ghost stories, Andi is screaming something very real right into our faces!

How does the new stuff feel? Like a very appropriate and utterly haphazard evolution of that entire horror punk sound – chaotic, yet laced with some twisted sense of order that maybe only Lovecraft could comprehend. I honestly feel Sex Gang fans will lap this up, but anyone else – like the baffled audience still clustered about the stage – might find it a tough mouthful of bloody broken glass to swallow.

There’s an intermission, a tiny cluster of the faithful remain by the stage whilst piano recordings wash over them, and then Andi Sex Gang comes back with a pig head mask on. I’ve tried delivering that line any other way and I can’t.
Tonight I’m just reporting what I’m experiencing and letting you process that information, Gonzo style. I’ve been drinking pints of cheap red wine from the VIP area and I think it’s actually bringing me closer to the Andi Sex Gang experience.

He drags out classic tracks, tortures them mercilessly and meticulously and the gnarled old punks with proud hawks thrash and stomp and cheer appreciatively. It’s a private members club for Batcavers and if you weren’t there, if you didn’t do it and don’t know it, then fuck you. 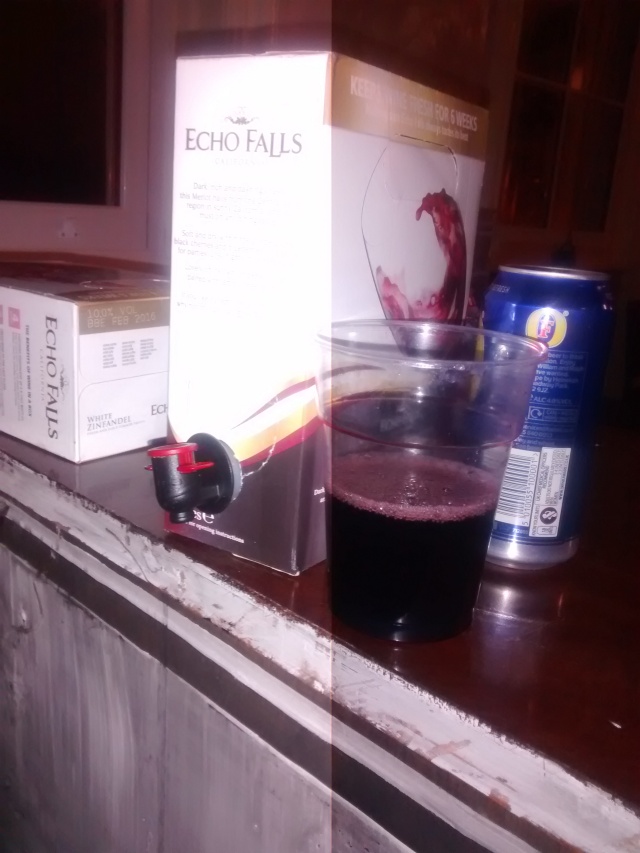 So here ends Saturday Satisfaction. What conclusions can we draw? Well, I shouldn’t drink that much red wine. My last memory is of furiously dancing to swing music that DJ Martin Oldgoth has no guilt over playing at a room full of sozzled Goths.

Considering the music, it’s quite conflicting actually. Nobody can dispute Jordan Reyne had three or four times the audience that Andi had by the end. I also can’t dispute the fact that only a tiny core went mad for The Chameleons. Could the line-up order have been altered, perhaps moving the well-received opening acts higher up the bill?

Prestige here must count for more, and Andi Sex Gang’s lineage alone will permit headline opportunities. My words are probably heresy to established diehard Sex Gang Children fans – but this writer can only render opinion, and he invites you to disagree with him!

News, reviews and other articles written from the UK Goth subculture
View all posts by The Blogging Goth →
This entry was posted in Uncategorized and tagged band, bands, event, festival, review, Whitby Goth Weekend. Bookmark the permalink.