PUSSYCAT AND THE DIRTY JOHNSONS

Maximum distortion, feedback and volume. It’s filthy fifties rockabilly and it’s drawing a major crowd at what is nominally a ‘Goth’ weekend. But it’s a loose and lazy term invented by confused journalists long ago, and Whitby crowds are pretty accommodating of anything that’s raucous and rocking.

These guys deliver in spades. Puss Johnson’s voice vibrates with overwhelming echo, as she snarls songs of love and living hard and fast. It’s an irresistible beat that has people nodding, bobbing and foot tapping all over the room.

BE AFRAID reads her shirt, and you don’t want to argue as she stomps across the stage, challenging hundreds of people in the audience to a fight simultaneously. Each song arrives like a leopard skin brick through your window, finishing like a punch to the jaw.

All except their final song, a chaotically indulgent number that runs on a breakneck drumbeat, cascading chords and a hymn of shrieking that the singer delivers at one point from the middle of the audience, before collapsing in a drawn out collision of exhausted musicians and punished instruments. Immensely satisfying.

DOCTOR AND THE MEDICS

Led by a crap Cyberman who beats up an inflatable Dalek with a feather duster, come the invading forces of the legendary Doctor and the Medics!

They kick off with an anarchic and enjoyable cover of Dead or Alive’s “Spin Me Round”, dosed with speed and heavy metal riffs. Then it’s on to another classic 80s anthem, “Tainted Love”, before being followed up with one of their own songs – “Not that you’d fucking know it” quips the Doctor. He peppers their appearance with sly, self-deprecating humor that is hilarious and refreshing.

At the heart of the band are the eponymous Doctor and his glamorous assistant Melissa. Where he is manic madness, staggering about the stage, Melissa is taut and sublime, a fantastic contrast. The rest of the band are dressed like someone made an eighties parody movie with access to a Halloween store – but they rock with sheer unbridled enthusiasm that is both corny and utterly authentic. 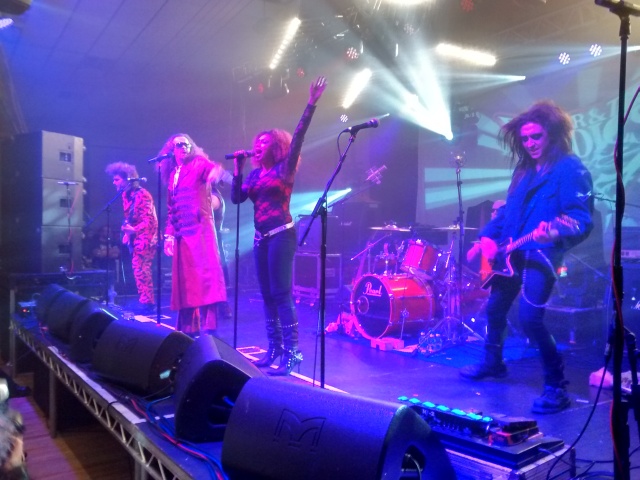 ” I do it ‘cos it makes my hair grow! ” the charismatic Doctor hollers, performing at his best. He recalls past appearances at Whitby, with Goths complaining about one-hit wonders playing – and then complaining about everyone having such fun to them!

“The Old Molecatchers Boot” comes out from retirement after almost twenty years and it is fresh, alive and kicking – and the Doctor dedicates it to The Damned, who took them on tour with them for free. My notes start running out at this point because I’m too busy laughing, drinking and enjoying myself!

There’s a cover of The Cult’s “Sanctuary”. My notes read “The Doctor’s voice is a bloody force of nature”. One guitarist has just lifted another’s kilt with his instrument. Ahem!” Yeah, it was that kind of show.

Next, all I’ve written is “Spirit in the Sky”, “crowd ecstatic” and “Ace of Spades”.

“Jesus Christ is not in the building – but William Control is”

The speakers are rattling my teeth in a way that even the bombastic Doctor and the Medics couldn’t. It’s raw power but Control wields it like a scalpel – “Scream for me! Make some fucking noise!” The crowd is only to happy to oblige. It reminds me of the Chameleons fans, a dedicated hard core that lives and breathes this performance, a generation that might otherwise have no connection with WGW – but Michelle, whose tweets I’ve been stealing frequently, argues firmly against that.

When William Control 1st played #wgw some said he was only here to draw a young audience. Now he’s won over everyone! pic.twitter.com/cAxfK3XyTQ — Michelle D’israeli (@MDisraeli) April 26, 2015

Control helms songs that draw on core and familiar electro concepts of hurt and betrayal, but he weaves a hypnotic tune that can’t help but draw you in. He’s over the moon he met Vanian, and acknowledging such an influence is no bad thing.

It is a rapid departure from the campy, anarchic attitude of Doctor and the Medics, but the crowd size stays the same and the people are just as active in their appreciation. Some of his songs definitely tingle my underused industrial appreciation nerves – it’s highly probable that all the bluster and ego that rankles old veterans is actually obscuring a damn fine musician. Recommended.

Darkness, and swirling smoke. A top hatted figure is the first thing to emerge from the dry ice – it’s Dave Vanian, pronouncing ponderously over a lone piano piece. It’s appropriately morbid for Whitby Goth Weekend and nobody could ever accuse the Damned front-man of being anything less than appropriately fashionable.

Then, we cheer, and the guitars are unleashed. The top hat is lost and forgotten, and the boys launch triumphantly into their first number.

They’ve headlined the whole weekend frankly. I have never seen the crowd so happy and adoring. The Captain solos frequently and we are rapt, except those who are bouncing like crazy. My friend, a first-timer to WGW who hadn’t even heard of The Damned before, announces that Sensible is one of the best guitarists she’s ever seen.

They deliver “Plan 9”, and Vanian is strutting and preening like a textbook black hat villain. He bites into the lyrics like a hungry man at a banquet and the years of passage melt away. It’s pure classic Damned, backed by a thundering storm of sound that effortlessly sweeps us away.

There’s an astonishing intimacy as well, such as when Sensible is playing a solo – you feel like you’re the only one in the room. Then, when the classics come crashing out, we’re part of an entire packed room celebrating!

“Eloise” arises casually in the middle of their set, and it is cheered just as much as any other song, and no more than any other either. Despite it being the sole appearance of The Damned on many alternative compilations, the crowd here aren’t for one-hit wonders (shades of Doctor & The Medics!) and it is merely one of a cavalcade of songs that we appreciate.

We’re three feet under the floor again, and it’s timeless and perfect. Occasionally I struggle to make out the vocals, and I wish the engineers could sort it out and give them the vocal range they need – Vanian doesn’t unleash his voice like a weapon, it’s quiet and controlled and richer for the lack of strain, but the engineers need to give him the presence.

At one point, Sensible has his guitar back over his head, shredding like a champion, and the crowd is a huge surging mass of people centered around a manic pit. Again, my notes are getting incoherent. I’m not a massive Damned fan, so I’ve jotted down ‘ask the Doctor about the songs’ – not from the Medics, my lovely friend Claire the academic Doctor!

According to her we heard a lot from Phantasmagoria, plus some early classics like Neat Neat Neat and New Rose. There’s the briefest of gaps before the encore, which is the most generous I’ve heard a band provide yet – probably thanks to the audience roaring like a riot, over which is clearly heard the chant “SENSIBLE’S A WANKER!”. The Damned clearly know they’re basically carrying the biggest weight of expectation for the weekend (except maybe Manuskript!) and seem determined to deliver each and every demand the insatiable crowd makes. 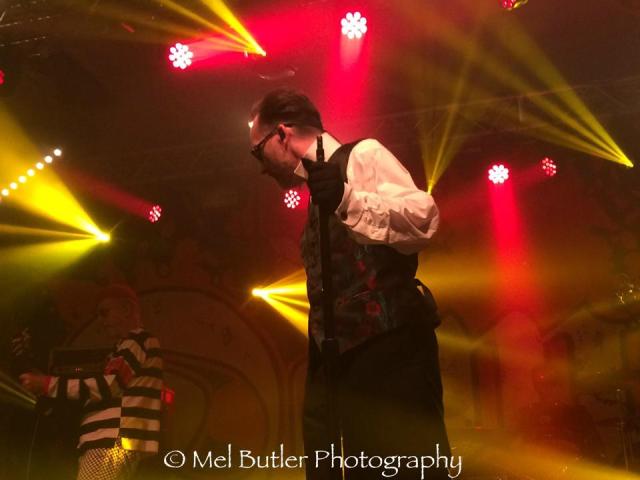 Their conversation is classic Damned banter, Vanian’s suave and mocking humour versus Sensible’s rambling insanity – there’s cheerful traded insults, bizarre details about Monty Oxymoron’s injuries acquired on tour, it all feels like a casual rehearsal until they start playing again. They simply blow the room away with classic closer “Smash It Up” and I have some trouble recalling anything else, after four full nights of watching bands and drinking intensely.

We’ve ended on a high though, and the bands tonight were a perfectly laid-out ladder of escalation, if a little jarring with William Control’s industrial-rock sandwiched between Doctor and the Medics and The Damned. It’s been more than worthy of the 21st Birthday celebrations, but I am looking forward to just two nights of bands in October!

You can go back and read my reviews from Thursday, Friday or Saturday now – and I’m considering a general roundup of Whitby addressing the festival as a whole beyond the bands. Watch this space!

News, reviews and other articles written from the UK Goth subculture
View all posts by The Blogging Goth →
This entry was posted in Uncategorized and tagged band, bands, event, festival, review, Whitby Goth Weekend. Bookmark the permalink.