Welcome to The Blogging Goth’s latest roundup of views and news relevant to the Goth subculture from me, the UK’s premier Goth blogger!

Announced just this morning via Twitter and their usually moribund website, the legendary industrial groove machine that is The Sisters of Mercy have announced a brief tour of UK cities in October of 2015.

The self-proclaimed Industrial Love Gods recently signed on to perform at Suikerrock, a Belgian music festival, at the start of August, and lead singer Eldritch is known to prefer continental dates to playing a ‘derelict nation’. 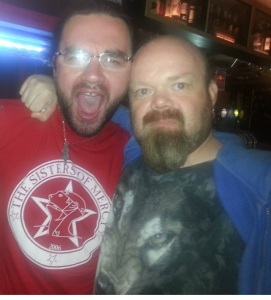 Nevertheless, it’s a prompt return after last year’s performances at Sonisphere, Scotland and Ireland when The Blogging Goth caught them in the unfamiliar surroundings of Dublin (the last Sisters gig was in ’97).

We’ll be finding something equally bright and loud for the spiritual homecoming gig in Leeds, and maybe other dates if money / transport / accommodation / inclination permits. See you there?

Goths have been holding out for the fabled ‘darker than black’ for their wardrobes since the first fishnets. Last year, we were all impressed with the research that yielded ‘Vantablack’ (which would also make a great band name), a material that broke records by absorbing all but 0.0035% of visual light.

Unfortunately scientists clearly have no sense of priority, and instead of a brand new range of ultimate aviator sunglasses for the upcoming Sisters tour, the latest development in nano-engineered ultra-black coating is a revolution in collecting solar energy!

American researchers have developed nano-tech paint that can be applied to ‘concentrated solar plants’ that are 90% more efficient at harnessing the power of the sun. After all these years of loathing the evil day-star, Goths may finally benefit by driving the pursuit of even darker shades of black!

One place the sun won’t be a problem is the North Yorkshire town of Whitby, at Halloween. This auspicious date will mark the second Whitby Goth Weekend of 2015, a more sedate affair after April’s four-day multi-band bonanza.

The line-up has been confirmed, with headline acts provided by firm fan favourites Spear of Destiny, and the surprise appearance of Altered Images. This Scottish-based band had an originally post-punk sound, supported Siouxsie and the Banshees in 1980 and had a debut album produced by Steve Severin in ’81.

Thereafter, however, they took a more mainstream and pop approach with some minor chart success before breaking up in ’83. Lead singer Claire Grogan has since performed several times since, and their headline appearance at WGW continues a theme set by bands like Heaven 17 and Toyah; a broader net that encompasses artists active during the Eighties who have some affiliation to the alternative scene.

Both those preceding artists pulled large, enthusiastic crowds so for door tickets alone, it’s understandable why the organizers are fielding bands like this, but it’s dividing fans on the WGW page – not that it’s exactly difficult to upset people online, or Goths, or both!

Will you be going to Whitby in October, and how do you feel about the lineup? Watch the latest trailer to help make up your mind!

Talking of Goth musicians, beloved Eighties synth superstar Marc Almond tweeted an intriguing image from the premier of Sky’s Hannibal season three. As many have observed, it’s the first time in a long time old colleagues Siouxsie Sioux and Steve Severin have been seen in public together.

Many more were speculating wildly and hopefully about any potential collaboration between Almond and Sioux, but the Softcell and Banshees singers wouldn’t be drawn! We can but hope!

One place it seems such creativity is not welcome, however, is a branch of the Co-operative, a UK supermarket. One employee in the Suffolk store must wear a wig and conceal her piercings to comply with the company’s dress code and policy.

Trudy Moorhouse, who has not commented on the matter, has had to adopt the requirements after eight years with her employer with no issue. The Co-Operative Food Group issued a statement saying,

“There is a clear policy in place regarding dress code and how colleagues present themselves in our food stores. An amicable arrangement has been put in place at the store with Trudy.”

You can engage in the discussion with others, and visit the petition set up by a friend and customer to have the Co-operative reverse its decision, on our Facebook page.
Tell us if you’ve had to adjust your appearance to meet your employer’s requirements, or if you’d prefer staff to adhere to a workplace dress code.