One of my favourite YouTube videos is the one taken at the Xclusiv Club in Batley, 1984. The (Black) Gold Age of Goth, it shows perfect hairdos and artless makeup in the incongruous surroundings of a sleepy, little West Yorkshire town – if you watch from 07:00 in.
But West Yorkshire has also been known as the People’s Republic of West Yorkshire, the revolutionary title awarded by Leeds drum-machine pioneers and arch-deniers The Sisters of Mercy.

Like a lot of UK Goths I moved to Leeds chasing that legacy of the scene, and found a somewhat tipsy and cheesy welcome at the University, in the unsteady arms of the Wendyhouse nightclub (now sadly Resting In Peace).

Billed as Alternative, Eighties and Goth it was essentially a student night with a playlist that started out dark, and then got steadily cheesy as the night progressed, based on the established fact that as Goths get drunk, they will dance to anything. It was also dauntingly huge, the entire Union building with a capacity of many hundreds, and a destination for Goths from all across the UK.

It also had a very popular industrial night running in an adjoining room called Mutate, which had dedicated and knowledgeable DJs spinning industrial, EBM and electronica to glowstick-waving hardcore motherfuckers. 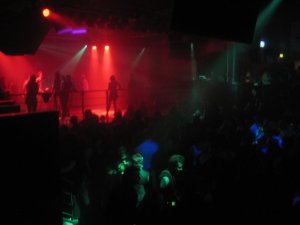 But don’t just take my word for it – thank instead Guy Berresford, who did a Spider Jerusalem on us and took some video-glasses to the club on 20th October 2012. For me, it’s a veritable who’s-who of the Leeds scene at the time – although I’m probably lurking in a corner perfecting my pout, so I cannot be seen! Be warned, there are strobes and flashing images throughout, as well as the vaguely disquieting sensation of motion in general.

Enjoy this unique perspective on the Goth scene in the early 2010s, and compare and contrast with the footage from 1984, just up the road. Goth isn’t dead, it’s just weirdly mutated and lost all sense of shame!

I would like to thank Glenn and Nik from Wendyhouse who DJ’d it selflessly for many years, as well as Gilly and Geof from Mutate, all their guests, bar-staff, and patient bouncers.
Like a lot of Leeds punters, we keenly felt the loss of the Wendyhouse and it’s nice to be reminded of it from such a familiar viewpoint!

Did you ever go? Leave your memories in the comments below!

News, reviews and other articles written from the UK Goth subculture
View all posts by The Blogging Goth →
This entry was posted in Uncategorized and tagged clubbing, fun, leeds, links, music, personal, response, video, wendyhouse. Bookmark the permalink.