Posted on September 4, 2017 by The Blogging Goth 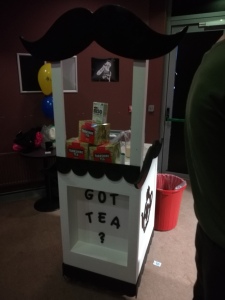 Sunday is the final day of Infest 2017. As with a lot of people, I feel the absence of our Master of Ceremonies, Tails, who sadly passed away. We celebrate in his honour with tea, cake, and a bit of Charleston! May you all raise a mug in his memory. I hope he looked on with approval as we then proceeded to get merry and listen to plenty of EBM on this last night of bands.

The Sisters of who? Never heard of them.

The opening band on a set always has the hardest challenge, and sadly Among The Echoes didn’t quite rise to it. They suffered from a lack of stage presence and, I believe, confidence. The mix wasn’t fair on them either, with the bass and percussion too high, whilst the vocals were both too quiet and too strained!

The small audience appeared fairly unmotivated, but as identified it IS a tough slot. The band provide crunchy industrial tunes comprised of not particularly original chords. A shame actually, as I would have appreciated a more rock-influenced band to break up the electro noise. Fans who’ve seen them before vouched to me that they can sound much better, so perhaps they’ll survive a second chance? 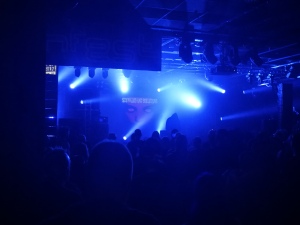 Dearly departed, we are gathered here today to cut shapes…

A futuristic sorcerer, hooded and performing incarnations at his technological altar. This is Sidewalks and Skeletons, creating gorgeous sonic worlds of haunting melody and spectral joy. It’s lovingly crafted, lingering and languid synth tinged with just the right amount of sadness. The room is in rapturous attention.

Personally, I’d like to see him break more into the aggressive WUB he occasionally drops but then I like a lot of menace in my music. When he does tear it up, it’s a hectic pulse-racing experience with bass fit to pop eardrums. Bloody good stuff. The sound produced is simply epic. As an intrepid aural explorer, I’ve gotta ask if people perceive this as Witch-House? If so, it’s a new genre I can bloody well get into. 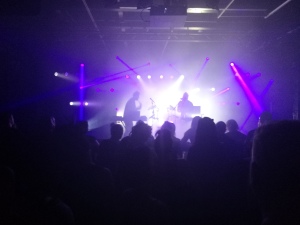 The first band to play a partially disassembled shower kit.

If you want real fist-to-the-face angry dark industrial, look no further than Vampyre Anvil. They produce pummeling drums to drive forward merciless tunes with howled, vicious vocals. I’m getting shades of early Fear Factory here, but keeping to a really tight, angry pace. The guys interchange and duet on vocal responsibilities but both deliver the angry gravel-voice style that is required.

I cannot describe sufficiently the energy and aggression these guys pit in, they’re beating the shit out of their kits.

They proudly inform us they aren’t any of their previous projects like Cyanotic or Acucrack, etc. What they are is providing high-velocity armour piercing dread. They rove all over the creative map, there’s some intense complex tracks that fire my excitement, but then some repetitive pounding that leaves me cold. A really varied act that leaves me… intrigued!

The Juggernauts are electro artists hailing from Belgium, and have scored high billing despite being an unknown amongst friends I asked. The inevitable technical difficulties kick in when starting up, a plague running intermittently through this festival. A five minute fix job is called for, then the dry ice rises and a catchy synth beat begins. To my surprise they’re dressed exactly as they are in their PR shots, future dystopia riot police armour. It looks damn good!

They’re instantly catchy, effortlessly producing complex rhythms and hypnotic beats. Their vocals are combative, assertive, confident and entertaining. They even apply distorted echo to their vox, an effect I love, but it makes the lyrics pretty much indecipherable! About three tracks in they suddenly kick in a tempo change that jolts the heart – really awesome stuff! I must observe, their video imagery of bald eagles soaring over burning landscapes is pretty transparent. As their set draws quickly to a close, I realize – they’re slick, accomplished, but have I heard anything that innovative? Perhaps not, this time. Still, a very satisfying set.

I see a little silhouette of a goth

A lot of people, myself included, have been awaiting iVardensphere, the Canadian industrial tribal band. Their stage setup is a crazed jungle of drum kits, both analogue​ and digital. They’re even firing smoke machines directly into the audience, building atmosphere and a nasty cough equally!

The impressive drum layout is immediately utilized. A fucking barrage of intricate, mesmerizing rhythms backed by spiky tunes basically assaults us. Their energy is both frenetic and professionally controlled, and the audience utterly adore them. I feel confident describing them as the Hollywood blockbuster of industrial – polished, honed, intricate and yet accessible. The levels take time to settle down but when they do it’s perfect coordination! “How is it Bradford? You look really happy!”
I get the merest hint of Prodigy, if they weren’t a mainstream sellout band, with vocals gargled in the throat of Satan itself! Looking around me, I note I have not seen the main room this packed all weekend!

When they gear down for slower tracks, the menace is magnified and enjoyment multiplies. These guys are absolute bloody magicians with drums. The fire doors are open to ventilate this huge crowd. The bar is almost empty! “You guys know how to mosh?” they demand angrily, before a hugely aggressive track, with Jamie climbing the amp stacks. The applause continues long after they leave the stage. A first class performance.

As can be expected, industrial mischief-makers Revolting Cocks kick off with some bizarre Jamaican patois and distorted bellowing in the pitch dark! There’s some high tempo drumming as the band slowly take the stage – it all feels like a weird trailer… then we’re in with a bone-jarring drum sequence and the vocals to carry the show!

These pioneers produce foot-tapping, infectious tunes. The band are excellently on point with flawless programming and songwriting, really showing their experience and (ironically!) professionalism. Throughout the set I feel like we’re hearing really early industrial, proper raw creativity from this most anarchic of bands. Pulse-reaching, heart-pounding stomp, RevCo can clearly still pull their weight!
It’s a really stripped back performance, but in that I mean they’re really on the ball, the fat trimmed, everything down to the second. These guys are showing every other band how decades of creativity and performance define a live act.

After Richard 23 departs the stage, we’re treated to Cattle Grid with Chris Connelly taking the lead, to a thrilled audience. It’s half nostalgia, half brand new rendition of a familiar classic. It’s a fucking pleasure to revisit the early days of industrial music. We queue up to be abused by them, heckle them and love the attention.

“Are you waltzing back there? Is that a northern thing?” Chris heckles back. The cybers shake their glow sticks in mock fury. It’s all building to a familiar climax – they are required to end on their skeezy cover of “Do Ya Think I’m Sexy” and they bloody deliver! What a perfect mix of nostalgia and novelty. So ends a brilliant Infest 2017!

So, what are my main highlights from Infest this year? For me, RevCo stole the headline slot ever so narrowly ahead of Die Krupps and Rotersand. I simply had the most fun watching them, relishing their madcap mix of early industrial and funky modern tunes.

Like a lot of people, I came away with a newfound love for iVardensphere, the most confident, aggressive and entertaining act on the whole bill. I’d tip Empathy Test, Sidewalks and Skeletons and Wulfband as all artists who will only go on to bigger and better things and I look forward to seeing them again.

Facilities wise, I hope the University Union can provide some additional technical support for the sound team, more and better-trained bar staff (and more reserves of alcohol!), and a broader array of catering options as well. As with other years, I also enjoyed my forays to the Escape Bar, and hope to see more guest DJs playing on the fringe of this great festival. My thanks to all staff, crew, and especially Chris M who gracefully allowed me a press pass to Infest. Here’s to next year for their 20th Anniversary!

News, reviews and other articles written from the UK Goth subculture
View all posts by The Blogging Goth →
This entry was posted in Uncategorized and tagged bands, festival, Infest, music. Bookmark the permalink.