Bob’s World: the biggest goth band ever is The Cure

There’s been a wealth of anniversaries recently. Bauhaus’ debut single, the anthemic “Bela Lugosi’s Dead” was released on August 6th 1979, so expect next year to be a major celebration of this milestone.  Siouxsie and the Banshees released their debut single and dancefloor mainstay “Hong Kong Garden” on August 18th, 1978.

More modestly, the well-established goth-rock band The Cure released their third single “Lovesong” from their eighth studio album “Disintegration” on August 21st, 1989. Although not a debut like their goth rock contemporaries, it was a commercial smash, hitting No. 2 in US charts and remains their most successful US single ever. The album itself represents a sudden return to the goth sound after the pop indulgences of “Kiss Me, Kiss Me, Kiss Me” and is widely rated as one of their finest albums.

This set me to thinking about The Cure’s position in that pantheon of major artists we revere in the goth scene, and how it’s possible we criminally underrate them. For example, Joy Division are hailed as influential founders, but after Ian Curtis lost his struggle with suicide, they became encased in the amber of nostalgia, never changing, never fading but never innovating. See also, Christian Death – which will forever be frozen in time as Rozz’s band regardless of activities after his death.

Pioneer and role model Siouxsie Sioux will always be a poster girl for our subculture, but her withdrawal in recent years has left the Banshees in splendid isolation.  Bauhaus’ eclectic musical career soared furiously, before coming to an abrupt halt with the band’s fracture five years later, leaving as their legacy a forty-year old song and some sweet style.
Early contemporaries like Adam Ant, Nick Cave, Ian Astbury and Jaz Coleman flirted with the style, then headed out to chart their own courses, never troubled by the jet-black albatross of the surprisingly endurable goth subculture.

The next wave of bands tapped into and refined that sound and style, and we were blessed with consummate professionals like The Sisters of Mercy, Fields of the Nephilim and Alien Sex Fiend. Yet they laboured in the shade of their first-generation progenitors, or suffered their own implosions that would derail their careers and prevent them from ever having the same impact. Much to the consternation of YouTubers, new musicians and those not obsessed with gatekeeping, goth remains – and probably always will be – inextricably tied to the giants of the first wave.

Yet, people were staggered when Steve Lamacq’s amusing feature the “Goth World Cup” (no relation to our ‘national’ team Real Gothic FC) crowned its overall winner as “Hanging Garden” by – The Cure. They’d seen off all their contemporaries, defeating in direct contest Siouxsie, Bauhaus and The Cult, but it still felt like a surprise when “Bela Lugosi’s Dead” crashed out in the semi-finals. That for me was the moment when I realized what was popularly thought about goth music might not really be the case…

It’s only been reinforced this year. Robert Smith curated the Meltdown festival in June, a ten-day extravaganza featuring a stellar array of artists that ran the gamut from just breaking to impressively well-established, with the event crowned by The Cure themselves. Validating new artists and bringing them to the attention of old goths is a policy that deserves its own article, by the way. We cannot live on preserved memories forever…

Not long after, their 40th Anniversary performance in Hyde Park in the summer was a sell-out 65,000 attendee performance to rave reviews. Accolade after accolade has been laid at The Cure’s feet, and belatedly I – and others – woke up to the fact that in Robert Smith we might have the world’s premier goth musician; standard reluctance to use that term notwithstanding!

I just find it so easy to imagine a pouting, haughty Pete Murphy, an elegant and aloof Siouxsie Sioux, or Andrew Eldritch’s drowned Ramone style whenever I imagine a goth-rock musician. Smith’s trademark messy hair and smeared lipstick visage lurks over their shoulders, a familiar and unremarkable presence.

Perhaps it’s Bob’s trademark modesty and humility, whilst his contemporaries are infamous for their bizarre personalities. Perhaps the failing is all mine, never a dedicated fan of The Cure – it took until 2004’s self-titled album for it to really click with me. If so, I beg forgiveness from the gatekeepers for my ignorance, and urge you all to accept Robert Smith and The Cure as the true custodians of goth, from its very genesis to 2019’s album… whatever it may be, and regardless of whether Bob wants to be associated with our scene. Rejection of goth is peak goth, after all! 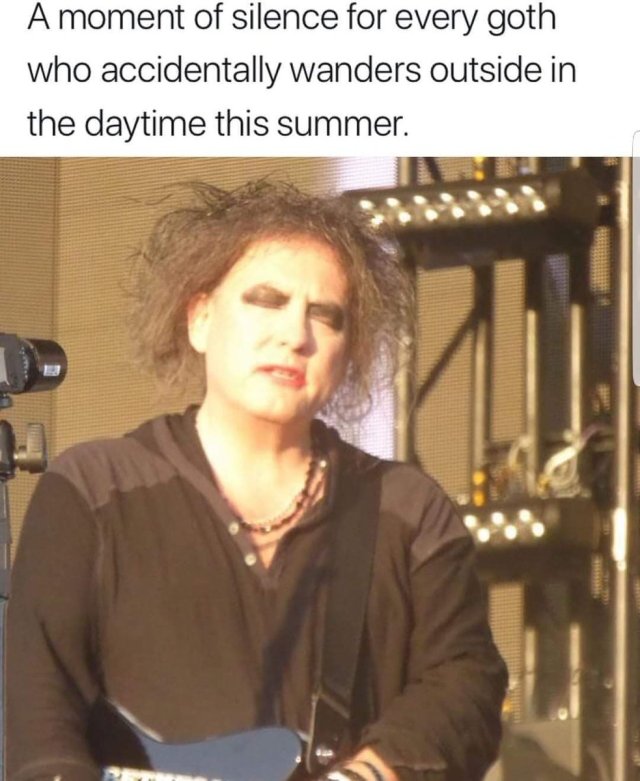 News, reviews and other articles written from the UK Goth subculture
View all posts by The Blogging Goth →
This entry was posted in Uncategorized and tagged bands, goth subculture, music, personal, review, the cure. Bookmark the permalink.

4 Responses to Bob’s World: the biggest goth band ever is The Cure