Bowie and Bauhaus: Ziggy Stardust is buried in Camden 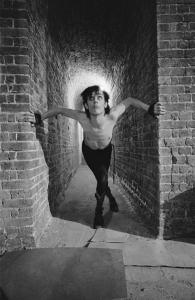 One of the earliest progenitors of goth rock, Bauhaus were at their peak in 1982 when they recorded a cover of the 1972 album track “Ziggy Stardust” by David Bowie, from the album “The Rise and Fall of Ziggy Stardust”. That it was all to spiral into breakup and resentment is as inevitable as night follows day in this fractious scene of ours.

Nevertheless, it was as golden to Peter Murphy as it was to Bowie. Released as a single just ahead of their third album “The Sky’s Gone Out”, it exploded in popularity and catapulted the band onto Top of The Pops. The album itself reached number four in the UK charts, a position unchallenged by any preceding or successive release by Bauhaus.

Bowie’s benediction continued to buoy up Bauhaus, with the band turning in a memorable performance in the horror movie “The Hunger” starring Bowie and Catherine Deneuve that was filmed in ’82 and released in ’83. The film opens with a caged Murphy crooning to a nightclub of post-punks and new wavers, stalked by the vampire lovers Miriam and John Blaylock. Treasured by goths for its gorgeous melding of sex, death and style, it was also the death-knell for Bauhaus who split up in July 1983 – one potential cause, the focus on Murphy above his bandmates in their brief movie appearance.

That appearance is a gorgeous opening sequence, and in part it seems inspired by the ridiculously gothic video for “Ziggy Stardust”, in which the band perform a truly underground gig – in an expansive Camden basement that doubles as a live music venue for alternative bands – of course!
Here, Murphy is locked up in a tiny cage again, released to perform the track with all the manic energy he is famed for. He stage dives into an audience of rampant, adoring, manic goths and punks who then bear aloft a shrouded body they hustle away into the shadowy catacombs. It’s a beautiful slice of gothic extravagance and sets in stone that Bauhaus imagery of death, excess and camp horror fun.

Notwithstanding Peter Murphy’s muffled resentment of the influence Bowie had on so many musicians – including him, we must give our unending thanks to the incomparable artist who first broke down the walls of conformity that led to goth’s ascendancy and, I hope, would appreciate every twisted evolution his music inspired.

News, reviews and other articles written from the UK Goth subculture
View all posts by The Blogging Goth →
This entry was posted in Uncategorized and tagged bands, goth rock, history, links, music, vampires. Bookmark the permalink.