So the infamous Blood and Icecream trilogy has come to an end with The World’s End, another quintessentially British comedy from Edgar Wright and Simon Pegg. 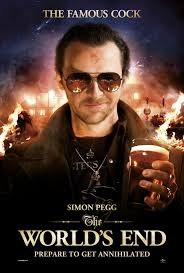 The theme running through all these films has usually been about responsibility – avoiding it and then learning to embrace it. This time it’s Pegg who starts out as a teenager in the Eighties – rebellion, drinking, and a strong love for rock-dirge merchants The Sisters of Mercy.

Flash forward thirty years and “Gary King” explodes back into his former schoolfriend’s lives utterly unchanged from those irresponsible adolescent days – still sporting the same head-and-star t-shirt from the Sisters back cataloguge, dyed-black hair and aviator shades.
King is a man-child, unable and unwilling to let go of his childhood when he was literally King of the Scene, and his love for a band from that time is part of the visual cue that tells us he’s trapped in a time-warp and needs to grow up!

That’s obviously the part that impacts Goths so specifically. Despite Sisters policy, and Eldritch’s firm denials, Goths make up a vast quantity of the band’s fan-base – so to be accused of being somehow ‘immature’ or ‘irresponsible’ for still loving this band stings somewhat. 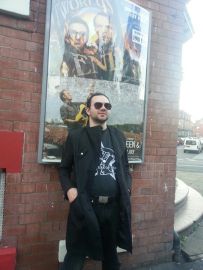 Well, it does at least for me. I’m in a peculiar middle-ground though – the same year The Sisters of Mercy performed their legendary Albert Hall gig, at the height of their power, I was joining the world in Eldritch’s ancestral stamping ground of Yorkshire. Not being in late-middle-age, I have no hesitation about broadcasting my love of the Sisters – hell, I started a tribute band to them!

That isn’t to suggest the band isn’t still active themselves – the Sisters routinely tour the world to sell-out venues, but is this movie suggesting every audience member is hanging on to an illusion of youth?

The fans themselves have definitely given the film a pale pair of thumbs up. Discussion on My Heartland, the premier Sisters message board, has been positive although a few contributors have expressed concern that they’re being portrayed as rather sad cases who haven’t moved on with their lives!

I asked Markfiend, the Heartland Chief Administrator, what he made of The World’s End take on being a Sisters fan.

It seems like Mark has the measure of the mood. Sisters fans might find the mocking tone slightly rankling, but probably only because it strikes a little too close to home! In reality, of course, there’s nothing wrong with loving the Sisters decades after you first discovered them.

We think Gary King is utterly justified in what he thinks – but maybe he needs to address his wardrobe first? Let us know in the comments below!

@simonpegg You should have said, we would have sent you the actual suit.

News, reviews and other articles written from the UK Goth subculture
View all posts by The Blogging Goth →
This entry was posted in Uncategorized and tagged fun, goth subculture, media, response, subculture. Bookmark the permalink.

1 Response to The World’s End (of Goth!)