A Feast of Festivals

The weather is turning worse, Halloween is looming, and there is a celebration of Gothic history and heritage that is unprecedented in its depth and detail. It’s the most terrible time of the year, and The Blogging Goth is picking some highlights to get you into the (sombre) mood!

Festivals celebrating Britain’s rich Gothic past are cropping up the length and breadth of this spectral isle. Later on today, we’ll be travelling to the second Gothic Manchester Festival, after last year’s successful combination of academia and fear! During the events, we’ll take to twitter under the event hashtag #HiPGothic so be sure to follow, favourite and tweet us! A full write-up will follow once the hangover has passed.

The capital isn’t missing an opportunity to get involved either. The British Library is running their exhibition Terror and Wonder: The Gothic Imagination until January 2015. We’ll be heading down to visit this as well, later this year, but until then read a lovely review by UrsulaWrites to whet your appetite and hopefully encourage you to visit!

Not to be outdone, the British Film Institute is in the midst of a vast promotion of our darkest entertainment creations, titled Gothic: The Dark Heart of Film. Heather Stewart, the BFI’s Creative Director, gave one of the best quotes we’ve heard:

With BFI Gothic, Britain will be filled with dread and fuelled by lust. Gothic has never been more potent or popular, reflecting the turbulent times we are living in, our deepest fears and hidden passions.

The BFI is co-ordinating events across the country, so check their listings and see what is happening near you!

Even more Gothic history is being explored on BBC4, the digital arts channel, who have already delivered two episodes of their documentary series The Art of Gothic, and those who’ve missed them so far can always catch up on iPlayer.
As yet they haven’t announced the date for a hotly-anticipated documentary featuring footage of many staple Goth, post-punk and other alternative bands performing at the BBC – so watch this space!

EDIT 23/10 @ 2:48PM (GMT): The BBC have updated their website to inform us Goth At The BBC will be shown at 10pm on BBC4. We’ll be recording this due to being out and dancing to all these bands in a nightclub!

If you like your history a little more recent, experience it at the oldest and most established Goth festival in Britain at Whitby Goth Weekend, as they celebrate their twentieth anniversary! This huge, sprawling and busy event is always packed to the gills with memorable events, and this year should be no different.
Taking a look through their guide to the festivities, they’ll be celebrating again next year for their 21st – from Thursday 23rd to Sunday 26th April, 2015. Talk about a long weekend! 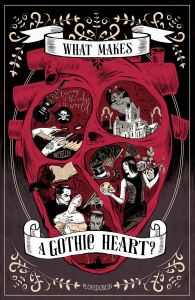 Travelling further afield, and the city of Dublin is exploring its grim, Gothic heritage this month. Birthplace of that most venerated creator, the city is proudly hosting a Bram Stoker Festival from tomorrow with an overwhelming array of events.

Beyond the festival itself, Dublin is a rich mine of dark delights to tempt the traveller… TBG can’t make it, so we’d love to hear from anyone who is entrapped by the Irish entertainments!

Even further across the Atlantic, to our American friends in New York, we hear about a new exhibition at the Met’s Costume Institute called Death Becomes Her: A Century of Mourning Attire. The media coverage lingers lovingly on the concept of ‘elegant mourning’ with a promise that it will ‘thrill your inner Goth’. So for those of who wear our Goth on our (dark, trailing) sleeve it should be putting the fun in funeral!

Those are just a few of the myriad events and celebrations of Goth culture, history and design. It’s a golden – or perhaps gloomy – time for our persistent subculture, and if we’ve missed any festival you know of, be in touch and let us know!