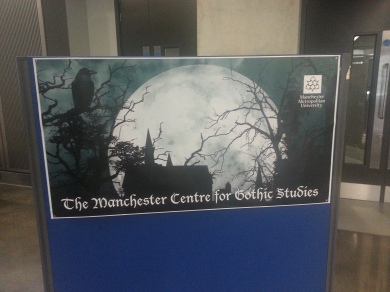 It had been arranged to promote the launch of the dedicated Centre for Gothic Studies, an exciting and ambitious academic group which intends to;

It will focus on studying, researching and teaching Gothic trends that run through popular culture as well as the more established mediums of literature, film and television. Intriguing plans are also made to launch a peer-reviewed journal entitled Dark Arts: An Online Journal of Gothic Studies and hold a biennial Gothic Conference from 2014 for post-grad students and early career academics – and hopefully, interested Goth journalists as well!

Reflecting the University’s goals, the sessions and talks conducted were primarily academic in tone, but were opened up to interested members of the public as well. This reflects a decision by many universities to engage with mainstream society and display the benefits of higher education and research. This topic is covered briefly by Doctor Linnie Blake, one of the principal staff members attached to the Centre for Gothic Studies, whose own manifesto declared;

“In October 2013 we will be working with a range of partners across the city in the form of the Gothic Manchester festival: a series of public events that not only showcase our work but bring the dark delights of Gothic culture to a wider non-specialist audience.”

As such, The Blogging Goth attended some of the festival sessions, to observe and report via live-tweeting. The first was inevitably to be one of the most interesting, as it was to focus on the most contentious topic in contemporary Gothic culture – the music.

Professor van Elferen lectures on, and researches in, Music at Kingston University London and applied a technical deconstruction to Gothic trends appearing in music created outside the bands of the modern Goth subculture.

Her decision not to comment on this popular facet of the underground youth culture raised some objections from those on Twitter and Facebook – but they neglected to acknowledge the academic angle and, to this commentator, her Euro-centric perspective as well. This is most clearly reflected below;

Whilst neofolk may fail to connect with the British popular cultural values, many agreed with Professor van Elferen’s other observations on familiar musical tropes. These included excessive use of reverb and distorted guitars, as well as a tendency towards clichéd lyrics and formulaic designs, which elicited a few ironic laughs from the audience!

Also covered were familiar movie scores, like Danny Elfman’s soundtrack for Edward Scissorhands, and the atmospheric and provocative music written for horror-survival computer games like Amnesia: The Dark Descent.  Our tweets from this session can be found by scrolling back through @TheBloggingGoth timeline.

Due to being based in Leeds, The Blogging Goth wasn’t able to attend as much of the conference as they would have wanted. In the interests of brevity, select tweets from the sessions seen are available below. We conclude with an interview of Dr Linnie Blake, a leading member of the Centre for Gothic Studies and some promising news about the Gothic Manchester Festival in 2014!

First, Dr Blake spoke on the developing trend of ‘dark programming’ in our TV choices…

Before Dr Sorcha Ní Fhlainn spoke of the cultural similarities between – of all things – vampire pop culture and recent US political leadership!

We next heard from Dr Anna Powell on the extremely current subcultural trend towards Steampunk, its nebulous connection to Goth and its hallmarks of fetishism and Neo-Victorian traits.

The key question – the division between #steampunk and #gothic @LancasterGothic what we were discussing! pic.twitter.com/QD6C34nG0v

A panel by Dr Joan Ormrod examined the difficult to quantify factors of realism, gender and authenticity on certain paranormal role-playing websites with a focus on zombies and vampires. This gave the opportunity for a sly dig at a certain popular book and movie franchise!

One of the most anticipated sessions came from Professor Sue Zlosnik, who gave a highly entertaining and humorous lecture simply entitled ‘Female Gothic’. It examined gender and age values and roles in Gothic literature, and discussed work being done at this cutting edge of academic research.

We lastly heard from PhD student Richard Gough Thomas who is advancing the case for a resurrection of Mandeville, an 1817 work by William Godwin – father to the famous Mary Shelley. Mr. Thomas reported the extensive work going into creating a modern, electronic version of what he calls a “pivotal Gothic novel” – which has not been published for the public.

During the lunch break, we were then lucky enough to sit down for a quick interview with Dr Blake, which concluded our too-short attendance at Gothic Manchester Festival 2013. We look forward to next year’s session!