Cemetery Confessions from The Blogging Goth

The motivation to set up The Blogging Goth as a more generalized Goth culture blog, rather than a music or fashion blog, seems to have been shared by The Count and the rest of the team behind Cemetery Confessions in America.

They run the only Goth talk show style podcast I’ve encountered, and I was deeply flattered to be interveiwed by The Count himself. Our actual interview starts a respectable two hours in to their latest episode, but I strongly encourage you listen to the whole podcast leading up to our chat, as The Count and guests talk classic Eighties Goth music.

The interview was conducted via Skype, and there were a few technical difficulties – as always! I had a new mic setup which I was terribly unfamiliar with, and a bottle of red wine which I was slightly overfamiliar with, so I hope you’ll forgive my slightly fuzzy delivery. 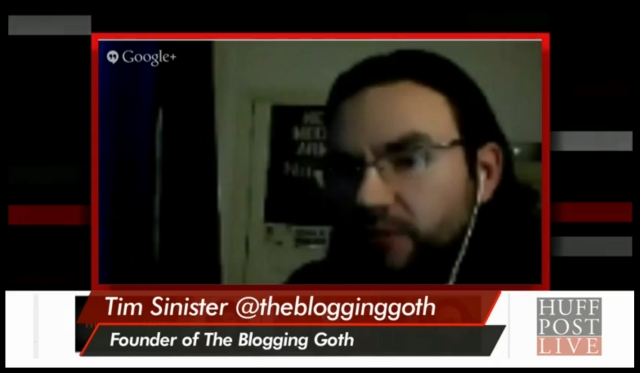 So if you want to hear about my beginnings, my self-identification as a “fully-fledged stereotype” and my personal perspectives on the Goth subculture, give it a listen.
We talk about the nature of the contemporary Goth scene in England, I namecheck some of the local promoters I really want to see supported, and we look at how English and US subcultures have matured, developed and / or declined.

There’s discussion of Gothic academia, which I only hazily recall – please revisit our articles on the Gothic Manchester Conference for more information on Manchester Metropolitan University and their Centre for Gothic Studies.
We also revisit the discussion over attacks on alternative subcultures being a hate crime, which is something I’ve covered on the blog and as a guest writer for other websites.

Then, we move onto happier topics as I froth excitedly about upcoming festival Whitby Goth Weekend, until my canny interviewer hits me with questions regarding ‘Goth legitimacy’ at the biannual festival. As a journalist, I strive to be as unbiased and diplomatic as possible, and refer to an article I wrote around last year’s Winter Whitby, which you can read and I hope form your own opinions!

We ended on a great question-and-answer series where I’m basically pleading with people to get out there and support their local nights, whilst silently acknowledging social media is essentially what allows The Blogging Goth to function. Never mind the contradiction, Goth lives on in clubs and gigs across the country – so long as we go to it.

My ongoing thanks to The Count, Cemetery Confessions and The Belfry Network for inviting me on and asking me some fantastic questions. I highly recommend everyone subscribe to this great series!