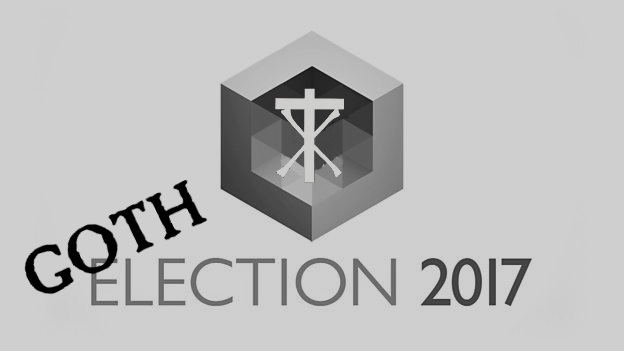 We’re just days away from the United Kingdom General Election on 8th June, which reminded me of our last foray into political waters with a poll we ran before the 2015 election. Along with all the official polling companies, we were dead wrong – but it was nice to dream of a green-and-black government in Goth Britain!

Another poll has been set up for recording Goth voting intentions for this election. We’ll close the polls on Thursday and publish them Friday, along with discussion about comparisons to the national results, as well as 2015’s Goth Voting Trends.

Last time, we attempted to cross the political spectrum by talking to alternative voters who were going for alternative parties – Mark for UKIP and Robert for the Green Party – both operating out beyond the traditional Labour-Tory divide.

Will the 18-24 surge for Corbyn’s Labour close the gap, or will May’s “strong and stable” policy win her enough of a majority to govern? Could enough fringe parties band together in alliance to rewrite British Politics?

Please register your vote, share with friends, and discuss your thoughts in the comments!

News, reviews and other articles written from the UK Goth subculture
View all posts by The Blogging Goth →
This entry was posted in Uncategorized and tagged mainstream, news, non-goth, politics, poll, response. Bookmark the permalink.